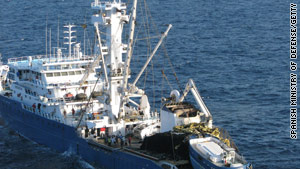 Earlier this month, the crew of Spanish fishing boat, the Alakrana, was released by Somali pirates after 47 days in captivity.
STORY HIGHLIGHTS
RELATED TOPICS

The Spanish Ortube Berria fishing vessel was in waters southwest of the Seychelles when pirates aboard two skiffs opened fire on the ship with light arms and a grenade shot from a launcher, according to a defense ministry news release. The Seychelles are a group of islands located north of Madagascar and southeast of Somalia, whose coastal waters have become known for piracy.

The attack happened at about 5:40 a.m., the ministry said.

A private security company aboard the fishing vessel returned fire and thwarted the attack, the statement said.

No one was injured, and the ship did not suffer any material damage.

Following the attack, the Ortube Berria was sailing southward away from the area, the defense ministry said.

Pirates have captured more than 50 ships this year off Somalia and are currently holding 11, according to information from Spanish Defense Minister Carme Chacon.

Earlier this month, the crew of another Spanish fishing boat, the Alakrana, was released by Somali pirates after 47 days in captivity.

The Alakrana was hijacked off the coast of Somalia.

On Sunday, the commander of a European Union anti-piracy operation, deployed a Portuguese frigate based in the area toward the site of the attack, Spanish authorities said.