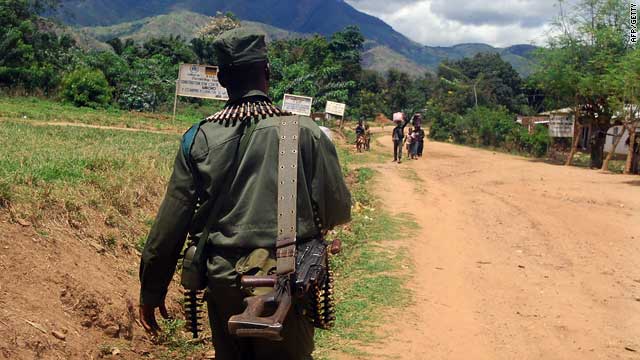 A soldier from the Congolese army [FARDC] patrolling in Mboko in south-Kivu, Democratic Republic of Congo, in early November.
STORY HIGHLIGHTS
RELATED TOPICS

(CNN) -- A U.N.-backed military operation to thwart rebels in the Democratic Republic of Congo has led to deliberate killings of more than 1,400 civilians in the country over a nine-month period, Human Rights Watch said Monday.

The human rights organization's report accuses militants and Congolese soldiers of brutal attacks, and urges the United Nations to end support for the military operation and find other ways to establish security.

Attacks include chopping civilians to death with machetes and slitting the throats of others. The attacks occurred between January and September, according to the report. Human Rights Watch said it based its findings on interviews with more than 600 victims, witnesses and relatives.

More than 7,500 women and girls were sexually abused in eastern Congo during the same period, Human Rights Watch said.

"Continued killing and rape by all sides in eastern Congo shows that the U.N. Security Council needs a new approach to protect civilians," said Anneke Van Woudenberg, senior researcher at the organization.

"The security council should send a group of experts to Congo to kickstart a serious civilian protection plan."

Congolese forces have been battling Rwandan Hutu rebels who fled to Congo after participating in a Rwandan genocide that left at least 800,000 people dead.

A U.N. peacekeeping mission, known as MONUC, backs the operation.

The United Nations has said that overall, the mission is working to boost stability and protect civilians.

However, Secretary-General Ban Ki-moon hinted at high death tolls last week, saying that the military operations have come at a "high humanitarian cost."

The Congolese armed forces and the rebels have violated human rights, Ban said. The peacekeeping mission has urged the government to address the problem, he added.

Human Rights Watch said the operations to oust rebels have not met expectations, and civilian casualties greatly outnumber the damage to rebels.

"Government representatives said the operations would bring peace and security to the region. They have not," the New York-based agency said.

War-torn Congo is rich in natural resources, including diamonds, gold and coltan, but most of its population lives in poverty because of the conflict.

The U.N. Security Council is scheduled to vote soon on whether to renew the peacekeeping mission in the Democratic Republic of the Congo.