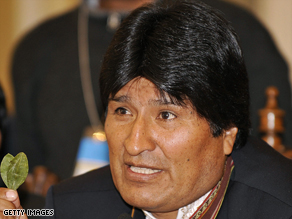 "Francisco Martinez, a Mexican-U.S. citizen, was in permanent contact with opposition groups during the whole era of conspiracy," the leftist president said. "He was the U.S. embassy person who contacted ex-police officers," Morales told reporters, according to The Associated Press, whose tape of the speech was broadcast on CNN en Espanol.

"The times of the colony will end in Latin America," Morales vowed to reporters. "We are in profound transformation."

Martinez was identified in media reports as the second secretary at the embassy in La Paz, Bolivia's capital.

Heidi Bronke, a spokeswoman for the U.S. State Department's Western Hemisphere Affairs bureau, acknowledged the move, but said it had not been communicated through diplomatic channels.

All About Bolivia • U.S. Department of State • Evo Morales