PARIS, France (CNN) -- The jet carrying 228 people from Rio de Janeiro, Brazil, that disappeared overnight as it entered an area of strong turbulence probably crashed into the Atlantic Ocean, the CEO of Air France said Monday. 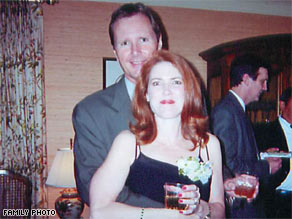 Anne and Michael Harris, who lived in Rio de Janiero, Brazil, were two Americans aboard the flight.

Brazilian and French ships and planes were looking for any sign of the missing plane, authorities said.

The first three hours of what was to have been an 11-hour flight appear to have been uneventful, CEO Pierre-Henri Gourgeon said.

But about 4:15 a.m. Paris time, Flight 447's automatic system began a four-minute exchange of messages to the company's maintenance computers, indicating that "several pieces of aircraft equipment were at fault or had broken down," he said.

"This succession of messages signals a totally unforeseeable, great difficulty," he said. "Something quite new within the plane."

During that time, there was no contact with the crew, Gourgeon said.

He said the Airbus A330 was probably closer to Brazil than to Africa when it crashed.

He noted that turbulence made flying "difficult" in the area but that it is "too early to say" exactly what happened.

"This is a catastrophe the likes of which Air France has never seen before," he said at Charles de Gaulle International Airport, where he met with relatives of the missing.

"I said the truth to them: The prospects of finding survivors are very low," he said.

The airline company identified the nationalities of the victims as two Americans, an Argentinean, an Austrian, a Belgian, 58 Brazilians, five British, a Canadian, nine Chinese, a Croatian, a Dane, a Dutch, an Estonian, a Filipino, 61 French, a Gambian, 26 Germans, four Hungarians, three Irish, one Icelandic, nine Italians, five Lebanese, two Moroccans, three Norwegians, two Polish, one Romanian, one Russian, three Slovakian, two Spanish, one Swedish, six Swiss and one Turk.

An official list of victims by name was not available late Monday.

The American victims were identified as Michael Harris, 60, and his wife, Anne, 54, by the couple's family and his employer, Devon Energy in Oklahoma -- the largest U.S.-based independent natural gas and oil producer. Michael Harris was a company geologist in Rio de Janeiro, according to a company spokesman.

Anne Harris' sister, Mary Miley, told CNN the couple had been living in the city since July 2008 and that they were traveling to Paris for a training seminar for Michael and for a vacation.

"Anne and Mike were indeed a beautiful couple inside and out and I miss them terribly already," Miley said in an e-mail.

Sarkozy said French authorities sent ships and planes to the area about 250 miles (400 kilometers) from Brazil. "Our Spanish friends are helping us; Brazilians are helping us a lot as well."

Brazilian President Luiz Inacio Lula da Silva told reporters in San Salvador, El Salvador, that he had spoken with Sarkozy but neither leader knew what to say. "All we could do was thank each other," Lula said. "He thanked me for the speed with which the Brazilian air force took charge."

Sarkozy said authorities were seeking the help of satellites that might be able to pick up signs of what happened to the 4-year-old Airbus 330.

No possibility was being excluded: Turbulence in the area was strong, but other planes were able to pass through it without incident, he said.

The plane reported a problem with the electrical system, "but the specialists refuse for the moment to express themselves about any possibility," Sarkozy said.

The jet also sent a warning that it lost pressure, the Brazilian air force said.

The Airbus A330 sent out an automatic signal warning of the electrical problems just after 2 a.m. GMT Monday as it flew "far from the coast," said an Air France spokeswoman who declined to be identified. It had just entered a stormy area with strong turbulence, she said.

Among the passengers were 126 men, 82 women, seven children and a baby, in addition to the 12 crew members, Air France officials in Brazil said.

Much of the route is out of radar contact, Brazilian air force Col. Henry Munhoz told TV Globo.

It was expected to check in with air traffic controllers at 3:20 a.m. GMT but did not do so, the Brazilian air force said in a statement.

At a crisis center at the airport in Rio, relatives of the missing complained of a dearth of information from Air France, the Brazilian state news agency reported.

One man, who identified himself as Bernardo, said his brother, Romeo Amorim Souza, and his wife were on the missing flight.

"I came to the airport because I wasn't finding information, and my parents are very nervous," he told Agencia Brasil.

The missing A330 last underwent a maintenance check on April 16, the airline said.

CNN air travel expert Richard Quest said the twin-engine plane, a stalwart of transatlantic routes, had an impeccable safety record, with only one fatal incident involving a training flight in 1994.

"It has very good range and is extremely popular with airlines because of its versatility," he said.

The model is "capable of communicating in several different ways over quite long distances even if they are out of radar coverage," said Kieran Daly of the online aviation news service Air Transport Intelligence.

The French Accident Investigation Bureau for civil aviation is investigating, the company said in a statement.

All About Airbus A330 • Air France-KLM Group