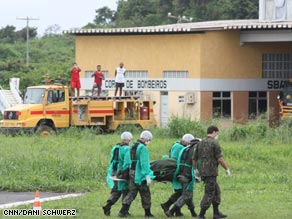 A forensic medical team carries the first of the bodies to be recovered from the Air France flight.

On glitzy tourist brochures, this Brazilian island is touted as a tropical paradise, a nature haven for rare species and a scuba diver's playground.

The taxis are dune buggies, hotel staff pin fresh hibiscus flowers to guests' doors, and frogs as big as a hand hop through luxuriant undergrowth.

But for the last week, the normally peaceful pace of life here has been interrupted.

The engines of Hercules transporters -- fitted out as observation planes -- thunder above the sound of lapping waves, and a Brazilian air force R-99 surveillance plane can be heard droning through the night.

This is the last piece of dry land Air France 447 flew over as it headed out over open ocean toward Africa and Europe. Probably most of the passengers never noticed the dim lights of Fernando de Noronha below them.

See CNN photos of the island and the recovery operation »

The Airbus would have flown over around 10:30 p.m. local time, three and a half hours after takeoff on Sunday, May 31. Many passengers would likely have been napping, snacking or watching an in-flight movie.

Sometime after, the plane vanished with 228 people on board.

From relative obscurity, this island has now become the forward staging ground for the Brazilian-led search and recovery effort -- a mammoth operation to retrieve the dead and debris of the downed Airbus 330.

Oceanographers say the Atlantic plunges to some of its deepest points in the area that is the focus of the search for wreckage -- as much as 21,000 feet (7,000 meters) deep in parts.

On Tuesday, two Brazilian air force helicopters -- a Black Hawk and a SuperPuma -- ferried the first bodies of victims back to dry land. Navy ships began pulling the dead from the ocean over the weekend. As those ships sailed close to Fernando de Noronha, the helicopters flew into action.

Helicopter pilots, speaking on condition of anonymity because they are not authorized to talk to the media, told how they hovered above the navy ship while it was still on the move.

Then crew members winched down almost 100 feet (30 meters) onto the deck and began hauling bodies up one by one.

They say it took about five minutes to lift each corpse aboard the helicopter.

As the helicopters touched down back on the island, drizzle turned to heavy rain. The remains were shrouded in olive green body bags. Some appeared bloated after days drifting in the Atlantic.

Soldiers and marines, wearing face masks to block out the stench of decomposition, carried the bodies on stretchers off to two metal shipping containers, outfitted with refrigeration units, that are serving as makeshift morgues.

There is little comfort in the latest chapter of this tragedy, except that a few victims are beginning their final journey home to relatives who will now be able to grieve.

Before that happens, forensic scientists will pore over the remains not only to determine identities but also for clues about why Air France 447 crashed.

Experts say burn marks, trauma injuries and water in the lungs could all offer telltale signs about why the Airbus went down and whether it broke up in the air or when it hit the water.

That process is likely to take place several days from now in the mainland port city of Recife. Fernando de Noronha is only intended as an initial collection point. There is no real logistics center.

Helicopter and airplane crews stand around on the tarmac of Fernando de Noronha's small airport after hours in the air.

Inside the airport there are a couple of snack bars and two souvenir stalls -- enough to serve the two commercial flights that come and go each day.

But it is not the laid-back nature of Fernando de Noronha that is slowing the recovery of the remains of the Air France flight. It is the distance of the wreckage from shore and the depth of the ocean.

Compare this disaster to others that occurred over open water:

Perhaps the other case most comparable to Air France 447 was South African Airways Flight 295 in 1987. That plane crashed into the Indian ocean off Mauritius in ocean depths between 13,000 and 16,000 feet (4,000 to 5,000 meters). Its voice recorder was found, but the data box was never retrieved.

News of this disaster has attracted international journalists, primarily working for French, U.S. and German networks, along with others from all major Brazilian outlets, to Fernando de Noronha.

Given the scale of the accident and the slow pace of the recovery effort, it seems reporters and military personnel will be vying for some time to come for a bed in the island's guesthouses alongside the normal clientele of surfers, divers and honeymooners.

These days, it is tough to focus on the sunset over one of Fernando de Noronha's picture-postcard beaches. Instead, thoughts turn to lost souls adrift far out in the Atlantic.