Air France crash: What do we know?

Kieran Daly is Editor of Air Transport Intelligence and blogs on aviation at Unusual Attitude.

LONDON, England (CNN) -- In one way we know a huge amount about the loss of Air France flight 447 -- much more than is usual so soon after an accident. But in another, we know nothing at all. 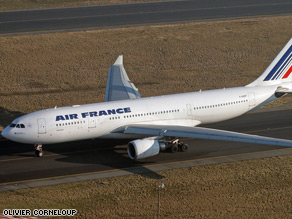 This Airbus 330 crashed into the Atlantic on June 1 while flying from Rio de Janiero to Paris.

The simple fact is that the blizzard of airworthiness directives, company memos, weather reports, technical specifications and diverse other documents that have surfaced since last week constitute entirely circumstantial evidence.

Aviation history is replete with accidents with causes utterly unrelated to what first seemed the obvious explanation.

For the investigators, the challenge is to keep an open mind while simultaneously pursuing obvious leads before evidence is lost and memories become stale.

But all that said, there are real clues to what might have happened to this Airbus A330.

Two things we know for certain: The aircraft did penetrate a region of severe weather, and the pilots were eventually confronted with a rapid series of system failures.

Unfortunately without the "black box" flight data recorders -- which would detail what happened to the aircraft's complex systems and how the crew behaved -- the precise sequence of events will be difficult to pin down. And their deep-water location puts them at the very limits of what is possible in terms of recovery.

The key question is perhaps not why the aircraft finally went out of control, but how it came to be where it was in the first place.

Did the crew appreciate the full extent of the wide band of storms confronting them? If they did not, then why not? And if they did, then did they take appropriate action?

This is not to imply that they made errors. Even with today's extremely sophisticated onboard weather radars, divining the true extent and power of a storm system remains an imperfect science, and some storm systems are simply not fully detectable by the radar.

Even if they did suspect trouble lay ahead, would any crew have felt comfortable taking the unusual decision to make a huge diversion around the system while out of radar range, or even to turn back?

What is also certain is that once they penetrated the storm, they were in a situation in which we know for a fact other A330s had suffered serious difficulties.

The A330's Pitot tube -- which in simple terms measures its speed through the air -- has proved unusually susceptible to icing and an improved model has been gradually fitted to the fleet, though not to the aircraft in question.

An iced-up Pitot tube deprives the pilots and the aircraft's automatic systems of airspeed information, making the aircraft much harder to fly and preventing numerous onboard functions from working properly -- a highly plausible explanation for the string of error messages sent by the aircraft shortly before the crash.

As it happens, an unusually detailed account of what happens in those circumstances has turned up in the form of an internal memo written in French last December by the safety office of the small airline Air Caraibes Atlantique, which suffered the phenomenon twice in quick succession.

They called a meeting with Airbus in which the airline's flight managers pointed out not only what had happened, but also the difficulty of understanding the immediate actions that Airbus recommended pilots should take. I've read it, and it is decidedly confusing.

Now picture the crew of AF447 struggling with that unfamiliar checklist at night, in a cockpit hammered by severe turbulence, possibly lightning, with no airspeed information and numerous warning lights and alarms sounding.

It is difficult to imagine many bigger challenges for a pilot, and anything short of near-perfect execution would have the potential for loss of control.

But the fact remains that this is today speculation.

All About Air France-KLM Group