(CNN) -- The Mexican navy smelled something fishy and their intuition paid off. They found nearly a ton of cocaine hidden inside a shipment of frozen sharks. 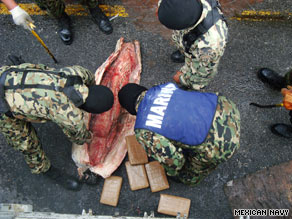 The cargo, which was aboard the freight ship Dover Strait, had been loaded in Costa Rica, Mexican navy says.

Navy inspectors at the southeastern port of Progreso, in Yucatan state, on Tuesday detected an anomaly in two shipping containers during a routine X-ray, according to a navy news release.

The inspectors zeroed in on a shipment of sharks. Upon slitting one of the frozen fish open, they found black bags containing rectangular packets filled with cocaine.

In all, authorities recovered 870 packages of cocaine, weighing 894 kilograms (about 1,967 pounds), the navy reported Wednesday.

In recent years, Mexico and the United States have stepped up drug enforcement efforts, pushing more of the drug trade to sea routes and forcing drug smugglers to find more creative ways to hide their contraband.

The cargo was aboard the freight ship Dover Strait and had been loaded in Costa Rica, the navy said.