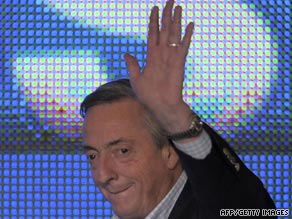 The ruling Justicialist Party, or PJ by its Spanish acronym, lost its majority in the Chamber of Deputies after being defeated in 18 of 60 races, the newspaper Clarin reported in its Monday editions. The party also lost four Senate contests.

He lost his bid to Francisco de Narvaez, who leads a rival Peronist party, Union PRO, by a tally of 34.6 percent to 32.1 percent.

The Kirchners' party also lost in some of the most important urban centers, including Santa Fe, Cordoba, Mendoza and Entre Rios.

Argentina's ability to withstand the global economic slowdown was a key election issue. Economic indicators from Argentina look good, but there is broad agreement among analysts that indicators such as inflation are underreported by as much as half.

An effort by Cristina Kirchner, who succeeded her husband, to tax agricultural exports led to a standoff with angry farmers who ultimately forced the government to backpedal.

"The Kirchners have been weakened by this latest economic crisis," said Robert Pastor, who was a Latin America national security adviser for former President Carter.

The election could signal that the limelight on the country's most powerful political couple could be evaporating.

"They'll probably begin to fade from the scene," said Peter Hakim, president of the Inter-American Dialogue policy institute. "It's going to be very hard for them to govern unless they do something they haven't been willing to do -- compromise and reach consensus."