(CNN) -- The mayor of a small town in the state of Chihuahua in northern Mexico was found shot dead Tuesday, apparently among the latest victims in the fight against organized crime in the region. 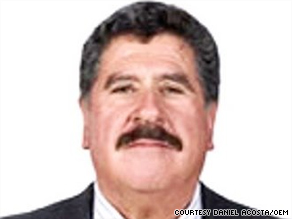 Hector Ariel Meixueiro Munoz, 53, was mayor of Namiquipa, a small town in the state of Chihuahua.

The body of Hector Ariel Meixueiro Munoz, 53, mayor of Namiquipa, was found inside his SUV on the side of a road on the outskirts of the rural town of 20,000, said Eduardo Esparza, spokesman for the attorney general in the state of Chihuahua.

"He was on his way to work in the morning," said Esparza. "We are still trying to confirm if there was a police escort with him at the time."

The incident has put other officials in the region on alert. Ciudad Juarez Mayor Jose Reyes Ferriz told CNN during a phone interview that death threats are common in his town on the other side of the Rio Grande from El Paso, Texas.

"It's very sad," he said. "This mayor was fighting crime, he had received several threats, but he was brave. Several of the mayors have received threats and we take them seriously."

Reyes Ferriz said the mayors of the state's large cities have the resources to take sufficient precautions, but for the mayors of smaller towns like Namiquipa, such security is a luxury they often cannot afford.

The mayor of Juarez and his family are protected by a 24-hour security detail and are driven in bulletproof vehicles.

"Sadly, this has become part of the process in the fight to regain security in the cities," Reyes Ferriz said.

Asked whether he feared for his life or those of his family, he would not say. "All the fears of a public servant are private," he answered.