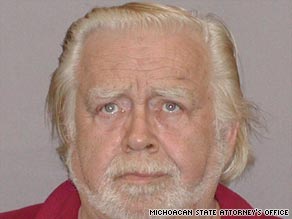 Robert Hamlin Wainwright, 66, was arrested in tMexico at the request of the U.S. Marshal's Office.

Robert Hamlin Wainwright, 66, was arrested in the city of Zamora at the request of the U.S. Marshal's Office in Tucson, Arizona, the Mexican authorities said. He faces deportation.

A January 27 notice by the U.S. Environmental Protection Agency said Wainwright, who has a prior felony conviction, was being investigated by the Indiana Environmental Task Force when firearms and ammunition were found at his home and business. He was tried and found guilty of firearms violations and was awaiting sentencing when he fled to Mexico, the EPA said.

According to the federal Secretariat of Public Security, Arthur Leland Sayler operated 36 child pornography Web sites in the United States and Mexico.