MEXICO CITY, Mexico (CNN) -- In response to a spate of attacks allegedly by a drug cartel, Mexico more than tripled the number of federal police officers patrolling the state of Michoacan, a government spokeswoman said. 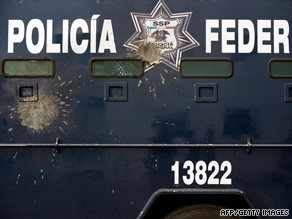 At least 18 federal agents and two soldiers have been killed since the weekend in Michoacan, the home state of President Felipe Calderon.

The sudden spike in violence followed the arrest Saturday of Arnoldo Rueda Medina, whom authorities described as a high-ranking member of the drug cartel known as La Familia Michoacana.

When that failed, drug gangs attacked federal police installations in at least a half-dozen Michoacan cities, according to authorities.

The Michoacan cartel also is accused in the slaying of 12 federal police officers whose bodies were found Tuesday on a remote highway.

Video from the scene showed three signs, known as narcomensajes, left by the killers. They all stated the same thing: "So that you come for another. We will be waiting for you here."

Since Calderon went after the drug cartels shortly after coming into office in 2006, more than 10,000 people have died across Mexico, about 1,000 of them police.

The state of Michoacan, on Mexico's southwest Pacific coast, is not alone in the wave of violence sweeping the country.

The border city of Ciudad Juarez set a record this weekend when its toll of drug-related deaths for the year topped 1,000, a distinction the Mexican city did not reach last year until September.

All About Michoacan • Felipe Calderon • Mexico