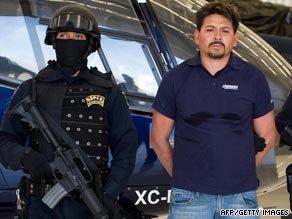 The recent spate of violence was sparked by the arrest of high-ranking drug cartel member Arnoldo Rueda Medina.

The federal officers' bodies were found Tuesday on a remote highway in Michoacan state, where at least 18 federal agents and two soldiers have been killed since July 11 due to drug-related violence.

Video from the scene showed three signs, known as narcomensajes, or narcomessages, left by the killers. They all stated the same thing: "So that you come for another. We will be waiting for you here."

The officers arrested Saturday are on the police force in the city of Arteaga.

Authorities said Wednesday they were searching for the governor's half-brother, who they say is a top-ranking member of La Familia Michoacana drug cartel. The cartel is blamed for most of the recent violence in the state. The governor's brother, Julio Cesar Godoy Toscano, was elected July 5 to the lower house of Congress.

The governor has publicly urged his brother to surrender. There were no reports of his apprehension as of late Saturday.

The sudden spike in violence followed the arrest July 11 of Arnoldo Rueda Medina, described as a high-ranking member of La Familia.

Under Mexican law, the officers arrested Saturday will be held for 40 days while officials determine whether to formally charge them.