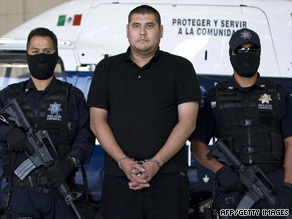 The arrests follow a deployment of federal police that nearly quadrupled the number of forces in the state of Michoacan, which has recently been a flashpoint in the government's battle against drug trafficking.

Among those arrested was Jose Alberto Lopez Barron, who had a handgun that was traced to one of the slain officers, federal police said at a news conference, Notimex reported.

The other three alleged drug cartel members -- Gamaliel Rodriguez Granados, Evaristo Armas Bello and Jaime Rafael Navarro -- were captured aboard a taxi in a town in Michoacan, Notimex said.

All are believed to have taken direct orders from the boss of the La Familia Michoacana cartel, a group that has become exceedingly violent in recent months, Notimex said.

The 12 slain off-duty police officers were found on the side of a remote highway July 14.