MEXICO CITY, Mexico (CNN) -- Suspected drug cartel leaders in Mexico don't often answer reporters' questions, although one did call a radio station a few days ago to offer the government a deal. 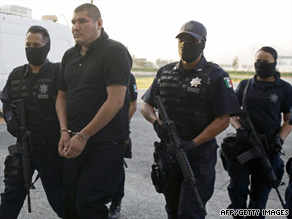 So it was rather unusual for Jose Alberto Lopez Barron to speak to journalists shouting at him during a police lineup Wednesday, opening up a new window on how his reputed cartel operates.

Lopez Barron was arrested this week in connection with the torture and killings of 12 federal police agents in Michoacan state July 13.

Mexican federal officials say Lopez Barron, also known as "El Gordo," is one of the top leaders of La Familia Michoacana, a drug cartel blamed for a rash of violence that has left at least 18 federal agents and two soldiers dead since July 11.

Speaking in a calm manner, Lopez Barron said that even if the cartel acted outside the law, it operates in an orderly manner and under rules that not only cartel members have to obey, but also residents in Arteaga, one of the cities the cartel controls.

Anyone who wants to sell drugs, he said, has to go through the Familia Michoacana.

"It has to be the company's merchandise," Lopez Barron said. "He has someone there who I believe is in charge of distributing cocaine."

Cocaine can be sold retail, he said, but not methamphetamine, known as crystal or ice, since La Familia has prohibited it in the whole state.

Authorities said Gomez is La Familia Michoacana's top leader. Gomez went on a radio show recently to offer a truce with the federal government. Mexican President Felipe Calderon quickly answered that the government does not make pacts with criminal organizations.

Lopez Barron said authorities have tried to capture Gomez but local residents have protected him.

"Elements from the federal investigations agency arrived in town -- I wouldn't know the exact number of agents -- and we had to leave town for the hills. We arrived at a small ranch called La Peña, and they gave us nourishment and refuge."

The suspect said municipal authorities respect the cartel and it respects the local police.

He said that although the sale of drugs has diminished, the cartel has not stopped paying local police for protection.

Lopez Barron was one of four suspects arrested this week in connection the slayings of the 12 federal agents in southwestern Mexico. Officials said he had a handgun that was traced to one of the slain officers.

The other three suspects -- Gamaliel Rodriguez Granados, Evaristo Armas Bello and Jaime Rafael Navarro -- were captured inside a taxi in a town in Michoacan, officials said.