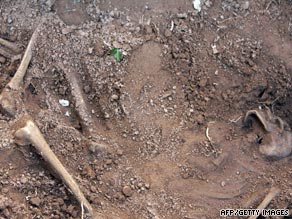 Human remains are discovered Thursday in an Asuncion, Paraguay, neighborhood.

Speaking at the grave site Thursday, President Fernando Lugo called it the remnants of a "painful period" in Paraguay's history.

Stroessner held power from 1954-89 and was known as a brutal dictator whose regime tortured and killed hundreds of government opponents.

The bodies were found in Tacumbu, a neighborhood in Paraguay's capital city, Asuncion.