MEXICO CITY, Mexico (CNN) -- Six members of one of Mexico's most active drug gangs, including someone accused of being the organization's bookkeeper, were arrested this week, federal authorities said Wednesday. 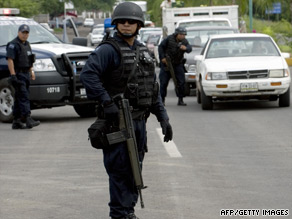 Federal policemen stand at a checkpoint in the state of Michoacan last week.

The arrests were the most recent in a string of high-level apprehensions targeting La Familia Michoacana; the cartel operates in its namesake state of Michoacan in southwest Mexico.

Armando Quintero Guerra, who federal police said was in charge of the cartel's expenses, was among six people arrested Tuesday, said Ramon Eduardo Pequeno, head of the anti-drug unit of the public security ministry.

Also arrested was Lourdes Medina Hernandez, who is in a relationship with La Familia's top boss, Servando Gomez, Pequeno said at a news conference.

The string of arrests followed the killing of 12 off-duty federal police officers whose bodies were found with signs of torture off a remote highway on July 14. Hit men for La Familia Michoacana linked to the killings were arrested last week, authorities said.

Authorities more than tripled the number of federal police officers patrolling Michoacan in response to the killings.

The killings were among a series of reprisals by La Familia after federal police captured one of the group's top leaders, authorities said.

An unprecedented wave of violence has washed over Mexico since President Felipe Calderon declared war on the drug cartels shortly after coming into office in 2006. More than 10,000 people have died in that time span, about 1,000 of them police.