MEXICO CITY, Mexico (CNN) -- One small slice Monday of Mexican President Felipe Calderon's war on drug cartels: two shootouts on the streets of two cities; a man and a woman ambushed in their car; at least four people dead; three soldiers wounded, one of them gravely. 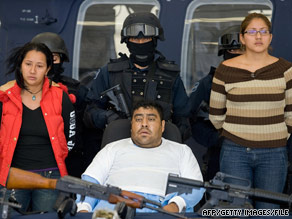 Suspected members of Los Zetas drug cartel are presented to reporters in Mexico City in April.

The confrontations between unidentified gunmen and Mexican army and federal police took place in the communities of San Nicolas de los Garza and Escobedo, near the U.S. border in the Mexican state of Nuevo Leon, the state-run Notimex news agency said.

One of the firefights lasted 45 minutes. At one point, the suspects launched hand grenades at the soldiers. House-to-house searches took two hours and it would be another seven hours before the areas were secured.

According to Notimex and news reports from the newspapers Excelsior, El Porvenir, El Nuevo Leon and El Norte, here's what happened:

Around 6 a.m., a military convoy came across a group armed men in several late-model vehicles in San Nicolas de los Garza. Shooting broke out, and the gunplay continued for 45 minutes along several neighboring streets as the suspects tried to get away.

The armed men abandoned their cars, blocked one of the streets with a Suburban truck and fled aboard several other vehicles.

The confrontation continued for another two hours as soldiers sealed off a city block and searched house-to-house.

"From early on, we could hear the shots and much shouting," Excelsior and El Nuevo Leon quoted an unidentified woman as saying. "We could hear footsteps on the roofs and soldiers yelling to them. There were several explosions; it seems like grenades went off, because we could hear it very loudly twice."

Around 7:45 a.m., the soldiers entered a house where the gunmen had holed up. A grenade went off upstairs. Three gunmen died there, though officials did not say if it was from bullet wounds or the grenade explosion.

At the same time, Mexican military and federal police were involved in a shootout with armed men in Escobedo. That confrontation left three soldiers wounded, with one of them clinging to life Monday afternoon.

Also nearby, a man and a woman riding in car were ambushed at an intersection by armed men in several cars who surrounded them and drilled their auto with bullets.

The woman died on the scene, her body sprawled on the street. The man was wounded but survived.

The violent scene in Nuevo Leon, which borders Texas, has become a near-daily experience in Mexico since Calderon took office in December 2006 and launched a war on drug cartels. More than 11,000 people have been killed during that time -- about 1,000 of them police and other authorities.

All About Mexico • Drug Trafficking • Veracruz