Venezuela to export gasoline to Iran

TEHRAN, Iran (CNN) -- Venezuela will begin exporting 20,000 barrels per day of gasoline to Iran next month as the nations strengthen bilateral cooperation, according to Iranian state media and the Venezuelan government. 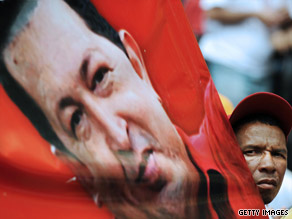 Iranian President Mahmoud Ahmadinejad and his Venezuelan counterpart Hugo Chavez announced the agreement Sunday. It will begin in October, according to Iran's Press TV and a Venezuelan government statement. Chavez said Iran will pay about $800 million a year for the gasoline.

Iran produces 60 percent of its domestic gasoline demand and imports the remaining 40 percent, Press TV reported. Despite having large oil reserves, Iran lacks the refining capacity to cover all of its internal gasoline consumption.

The leaders had said on Saturday that they plan to stand up against "imperialist" foes -- a reference to the United States and other nations opposing Iran's nuclear program -- by cooperating on a range of issues, including nuclear power.

"Expansion of Tehran-Caracas relations is necessary given their common interests, friends and foes," Ahmadinejad said after a meeting with Chavez, according to Iran's semiofficial FARS news agency.

Chavez arrived in Tehran on Saturday with a team of high-ranking officials for a two-day visit.

Chavez highlighted bilateral projects already under way, including the construction of ethanol plants in Venezuela and gas exploration in Iran by Venezuela's state-run oil company.

The Venezuelan president said he aims to build a "nuclear village" with Iranian help in his country, according to Press TV. The details of such a plan were unknown.

The visit was Chavez's eighth to Iran and the first since Ahmadinejad's disputed re-election.

Chavez's trip follows visits to Libya, Algeria and Syria. He will visit Belarus and Russia before returning to Venezuela.

All About Hugo Chavez • Mahmoud Ahmadinejad