Nip and tuck on a budget in Argentina

BUENOS AIRES, Argentina (CNN) -- James Brandon is concerned about getting old and looking older. So the 44-year-old events planner from Canada decided on plastic surgery to help bring his boyish looks back. 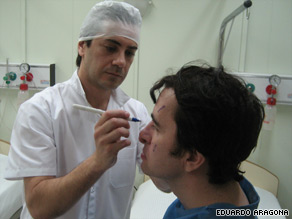 Like many people struggling through the global economic crunch, cost was a concern, and Brandon soon realized that having surgery at home was beyond his budget.

So he began investigating options overseas and quickly settled on a city that has become one of the most popular destinations in the world for plastic surgery -- Buenos Aires, Argentina.

"I learned that Argentina has a high standard and long history of plastic surgery," Brandon said.

In August, Brandon traveled 5500 miles (8,800 kilometers) south from Toronto to Buenos Aires for liposuction, a nose job and eye lift -- all at a fraction of Canadian costs.

Argentina's weak peso and world-renowned surgeons have turned it into a Mecca for cosmetic surgery tourism.

Thousands arrive annually for procedures and then stick around to soak up the sexy urban vibe of Buenos Aires, a city where looking your best is paramount.

"I've definitely noticed here that people are obsessed with the way they look. I've seen many people with plastic surgery," says Brandon.

Ever since Argentina devalued its currency in 2002, dozens of plastic surgery tour operators have opened in Argentina, offering promotions for international clients that include 'tummy tucks and tango' as well as trips to snow-capped Andean peaks, subtropical waterfalls and polo ranches. Would you consider plastic surgery? Sound off below

Estimates say that 1 in 30 Argentines has gone under the knife, making surgeons here some of the most experienced on the globe. Medical tourism has seen a huge jump over the past decade, and is projected to be a $100 billion dollar global industry by 2010, according to the Deloitte Center for Health Solutions.

"You can get excellent plastic surgery here at two or three times less than the cost in the United States or Europe," said Dr. Williams Bukret, a Buenos Aires-based surgeon who performs around 180 plastic surgery procedures a year, most of them for foreign clients.

"In our society we understand that it is important to feel better, to feel good and to look great," he said.

But some say that Argentines are too obsessed with their image, leading to high rates of eating disorders, especially amongst young women. Experts partly blame the country's volatile history - especially the ruthless military regime that ruled in the 1970s and 80s -- for these body image issues.

"We had a difficult past and we try to forget. And so we try always to be young and always beautiful. It's difficult for us to understand our past," says Dr. Mabel Bello, director of the Argentina Association Against Bulimia & Anorexia.

Striving to look beautiful in Argentina can be a burden, especially if you are a foreigner, says Boston-native Tracey Bates, who has lived in Buenos Aires for the past 18 months.

Bates recently elected to have rhinoplasty surgery in Buenos Aires, and has also welcomed several American friends who have traveled to the city for their own plastic surgery procedures.

"There is a pressure here, you hear it from all the Americans that come: 'Maybe we are a little bit chubbier than them. All the girls here are beautiful with perfect skin' -- so it would be a pressure," says Bates, 35.

James Brandon felt the pressure as well. It is what led him to Buenos Aires for cosmetic surgery, as well as his decision to record his experience for a planned documentary film about plastic surgery within the gay community.

"I am turning the camera on myself and in the process maybe learning more about myself, learning why I really want to do this, and why I feel the pressure," he says.

As long as the pressure persists - and the price is right - people will continue to travel in search of that perfect look.