President, indigenous groups at odds over fatal protest in Ecuador

QUITO, Ecuador (CNN) -- On the edge of Ecuador's Amazon Basin, the Upano River gives life to a vibrant agricultural sector that keeps the economy of the southeastern city of Macas beating. Bananas, papayas and coffee are some of the foods farmed by the largely indigenous population. 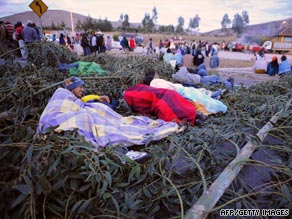 Indigenous Ecuadorians block the Pan-American Highway on Monday as a protest.

But other riches and natural resources in the Amazon area, such as precious metals, water and oil, have ignited an intense conflict between the government and indigenous communities that spilled into violence this week.

President Rafael Correa and indigenous leaders on Thursday cast blame on each other for Wednesday's incident near Macas, where police clashed with indigenous protesters who were blocking a highway.

According to the government, one person, a teacher from the Shuar nation, was killed, and 40 police officers were injured.

Tito Puanchir, president of the Confederation of Indigenous Nationalities of the Ecuadorian Amazon, or CONFENIAE, put the number at three indigenous residents dead and 10 injured.

The current impasse revolves around a proposed water law and a mining law, which locals say will impact area resources without their consent.

The key complaints were the privatization of water sources, priority of water access for industry, and lax pollution regulations, according to Amazon Watch, an indigenous rights advocacy group. Protest organizers called the clash a sign of "civil war" that violated international human rights law.

The protests, which began on Monday, also called for an end to mining and oil extraction in the region, the group said. A coalition of indigenous groups halted their demonstrations after the government ordered them to, but Puanchir's CONFENIAE defied the calls and continued to block roads.

"The response from the government was gunfire from the ground and the air," Puanchir told CNN.

The leader said that police, backed by a helicopter, opened fire on the protesters unprovoked.

"We are known for making our protests peaceful," he said.

Correa had a very different interpretation of the incident.

In an interview with the state-run media on Thursday, Correa said that the police were not armed and had only riot gear to protect them from demonstrators who were wielding shotguns.

The Shuar man that died was killed by protesters' own weapons, Correa said.

"The 40 police officers were injured by the same shotgun pellets that killed the brother Shuar," he said. "Those are the consequences of the violence called by radical organizers."

Opposition lawmakers on Thursday demanded the sacking of Interior Minister Gustavo Jalk and the country's police commander in response to the incident, and asked Correa for an independent investigation.

The president said he was "devastated" by the death, and indicated that the government would investigate and prosecute those responsible for the violence.

Correa also called on indigenous leaders to travel to Quito, the nation's capital, for a face-to-face meeting.

Puanchir, on the other hand, said that local leaders have extended an invitation for Correa to meet them in the Amazon region. Another standoff.

"We have decided to open space for dialogue with the president and his government at a meeting here," Puanchir said.

The incident was similar to a June protest in the Amazon region of neighboring Peru, where more than 30 people were killed in clashes between police and indigenous protesters.

Tensions between indigenous communities and their governments over natural resources often trace long-standing, historical fault lines in Latin America between the rich and the poor, the political elite and the masses, and the urban and the "campo," or rural areas.

In Peru, the clashes between indigenous protesters and police eventually resulted in the repeal of two decrees that indigenous groups had said would cause their native lands to be exploited. The prime minister and several cabinet members were replaced in the aftermath of the violence.

At the center of the tensions was a series of land laws that would have made it easier for companies to gain concessions for oil drilling, mining and logging, including on indigenous lands in northwest Peru.

Unlike Peruvian President Alan Garcia, who is strongly pro-business and pro-industry, Ecuador's Correa is a leftist who has worried investors by renegotiating production-sharing agreements with foreign oil companies. His politics and his comfort with his country's indigenous communities -- he speaks the indigenous Quechua language -- don't make him an obvious person to be an opponent to them. Newspaper reports, however, point out that most indigenous communities voted for his opponent.

"Correa's 'revolution ciudadana,' or peoples' revolution campaign, recognizes citizens' rights to protest and resist, which is exactly what indigenous communities were doing," said Kevin Koening, Amazon Watch's Ecuador-based coordinator. "Sending 500 police to violently disperse demonstrators was not only a blatant violation of human rights but also goes against the spirit and the letter of the constitution Correa fought so hard for."

Correa said that he sees other, political, forces at work behind the current conflict.

"The problem is not the water law, or the mining, or the autonomy of the region," he said. "I fear that, deeper, there are motives of destabilization."

All About Ecuador • Protests and Demonstrations • Peru