Editor's note: This article contains profanity that some may find offensive. This is part one of a three part series showing different aspects of life inside Colombia's drug gangs. 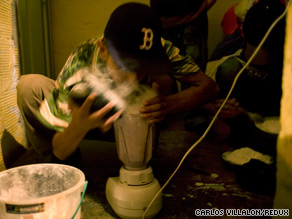 A gang member sniffs in a cloud of cocaine dust as he cuts the drug with other substances.

MEDELLIN, Colombia (CNN) -- A young man with tattoos covering one arm rolls hundreds of marijuana joints in the half-light of a shack, perched on a hillside in a Medellin slum.

A 9mm pistol and a .38 revolver lie on his work bench. An old battery-powered radio blares out the salsa music classic, "Todo Tiene Su Final" or "Everything Comes To An End."

"I'm getting calluses on my tongue rolling all these spliffs," he laughs, telling me has enough marijuana for about 1,000 joints. He and his comrades plan to sell them for about 50 cents apiece.

A few doors away, two other gang members have raided their mother's kitchen for soup plates, drinking glasses and a blender.

They've just taken delivery of a kilogram (2.2 pound) brick of pure cocaine. Their job now is to cut it and package it in gram bags to peddle on street corners they control.

Watch as cocaine is cut »

A female gang member shows up with two more bags, one containing powdered caffeine and the other lidocaine, a dental anesthetic used to dilute the pure cocaine.

They mix business with pleasure. Every now and again one of the gang members pulls off the top of the blender and breathes in a cloud of pulverized cocaine.

One of them coughs and keels over in the kitchen. Seconds later, he's back on his feet snorting cocaine off a spoon.

"Breathing that cocaine cloud mellows me out so I need a line to take me back up," he says.

Standing in the background, snorting lines of pure cocaine off a pocketknife is the gang leader, a man in his mid-20s. His cohorts call him "Chief."

He tells me they'll sell the heavily cut cocaine for $1.50 a gram. Higher purity powder goes for about $4 a gram. That's much cheaper than the $50 or $60 a heavily cut gram costs on most U.S. and European streets, according to estimates from the U.S. Drug Enforcement Administration.

I agree to conceal Chief's true identity to protect him from the police and rival gangs. As we chat, he dismantles a small caliber pistol.

Watch the gangs in action »

"Around here the only law is the rules of the street," he explains. "The rules don't change; they always will be the rules, here or anywhere else."

A trusted source, who made the introduction for me, tells me Chief is a "total animal living on borrowed time," who has earned so many enemies he cannot risk stepping outside the few hundred square yards of his home turf.

"I'm only human, of course I get afraid," he says. "Afraid my life will end suddenly before I can do anything to get out of this war."

Medellin is once again in the grip of a vicious drug war. In January to September this year, city authorities say the murder rate has more than doubled with almost 2,000 killings.

Watch marijuana joints being rolled by the hundreds »

That makes Medellin as dangerous as Ciudad Juarez, the frontier town dubbed Mexico's most dangerous city as a result of the ongoing cartel war there. Authorities in Juarez say killings are up from last year and are hitting record highs.

Colombian authorities estimate there are around 130 street gangs -- known as "combos" -- in Medellin, totaling some 6,000 members. Their only real loyalty is to the money that drug capos dole out to hire a gang's services.

Capos will supply them with drugs to retail on street corners and occasionally issue them weapons to take on rival gangs loyal to another crime boss.

Until earlier this year, Medellin's drug underworld was ruled by the so-called "Office of Envigado," named after a district of the Medellin metropolitan area. The "office" was a syndicate of the top cocaine bosses who agreed on the basic rules of doing business in the area. They shared smuggling routes and acted as the ultimate enforcers if cartel members reneged on deals or debts.

But the "office" has been ripped apart by infighting. Some senior members were arrested, some of those already in jail were extradited and others cut cooperation deals with U.S. authorities. That left the lower ranks fighting to fill the power vacuum.

It's an internal battle that is still raging.

Watch how CNN's Karl Penhaul got unprecedented access to the gangs »

"The ones fueling this war are the ones from the other side. They've f***ed up Medellin," Chief says. "They're from Medellin but they're traitors."

"They want to get control of all Medellin so they're shooting up one gang then another. They're getting paid to fight. These are wars between the big capos and we're paying the price out here on the streets," he adds.

Chief and his allies have stopped rivals intruding on their turf by strictly enforcing what they call "street rules." A day before our meeting, Chief says he helped bury one of his friends who had been gunned down when he ventured into the heart of Medellin with a girlfriend.

"I couldn't even bear to take a look inside the coffin," he began explaining. "We don't really know who did it. But it was that crack head girlfriend who persuaded him to go down there. So we killed the bitch.

"You see that's street rules. You have to answer for our friend and the only way you can do that is pay with your life," he says.

Chief shies away from questions about which cartel boss is bankrolling his gang. But clearly somebody has been supplying them with guns. They pose with a Czech-made .22-caliber rifle and an assortment of semi-automatic pistols -- as well as the wholesale supply of drugs they then sell on the streets.

My conversation with Chief is interrupted when another gang member arrives at the improvised drug den. He mumbles to his boss that a local man has been beating up his wife. Chief authorizes his underling to go and thrash the accused man with a pool cue.

"I don't think we need cameras for this one please," he requests.

As I get ready to leave I have one last question for Chief: I want to know if he ever had any dreams.

"I've tried to get out of this but it's never quite worked out," he says. "I'd like to sail away in a sailboat. Alone and far away."