Editor's note: This article contains profanity and graphic images that some may find offensive. This is part two of a three part series showing different aspects of life inside Colombia's drug gangs. 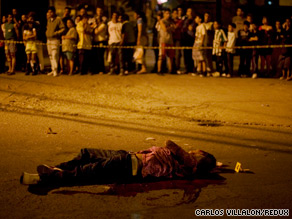 Samir Romero, wanted by police for two murders, was killed in August. He was shot 13 times.

But a longstanding and trusted source, with intimate knowledge of Medellin's violent subculture, assured me the two men I was about to meet were the real deal.

My destination: a single-story home in the city's notorious "Commune 13" district where I had set up a meeting with two hit men, who have for years hired their lethal services out to the cocaine cartels.

Inside the house, a man called "Red" sat on a couch toying a fully loaded 9mm Ruger pistol. "This will stop somebody nicely," he said, as I glanced at it.

His face and arms were covered in burn marks. He said it was a testament of the day a barrel of acid spilled onto him as he was working in a clandestine cocaine processing lab in northern Colombia.

Red explained that after the accident, the lab foreman tossed him out, half-dead, into a jungle clearing. What little strength he had left, he said he used to bat away vultures. And, against the odds, he made his way to safety and slowly recovered.

When Red left the clinic months later, he said he went straight back to the drug lab and gunned down the foreman and three of his henchmen.

That wasn't his first killing though, he told me. When he was just 11 years old, Red recounted, he took a razor to the throat of a neighborhood drug pusher who had been molesting his little sister.

The other man, "C", sat quietly as I listened to Red. Like Red, my source told me, "C" was also the so-called "chief" of a number of neighborhoods -- running local drug-peddling operations, extortion rackets and organizing hits for a big cartel boss he simply referred to as "El Cucho," or "The Old Man."

It was a hot morning and he was shirtless. His chest was branded with a tattoo of the Virgin Maria Auxilatrix, known in Colombia as the "Virgin of the Assassins."

Hitmen, or "sicarios" as they call them here, revere her and pray to her for protection against arrest or death and for help to carry out their killings.

Watch as Medellin law enforcement moves from killing to killing »

During our time with the hit men they offered a fascinating insight into their violent world -- from how much they get paid to what their mothers think of their lifestyle:

Penhaul: Why are Medellin's drug bosses and the street gangs in a war right now?

"RED": "These problems come about because they're looking for a good man to run things. We have to find him and, in order to find him, what's happening right now has to run its course."

"C": "Medellin has exploded right now because different groups want to control it and earn money and gain territory. The authorities locked up, extradited, or cut cooperation deals with the big guys, the ones who controlled all this. Those were the ones people respected. Now there's no respect and anybody who has a bunch of money is grabbing a few kids from a poor neighborhood and putting them to work."

Penhaul: What are the cartel bosses paying for a contract killing now?

"C": "If you're talking about a contract hit then right now you can get four or five million pesos (between US$2,000 and $2,500) to kill some idiot slimeball. Then of course there are bigger hits where you can earn 15 (million) or 20 million (between $7,500 and $10,000). Some of those hits pay pretty well. There's a lot of people around here with a lot of money and they're using it for bad things. Sometimes even the politicians will pay for a hit to get somebody out of their way."

Penhaul: Why did you get into this lifestyle?

"C": "I grew up in a slum and every time I stepped outside the door there were guys from the local gang smoking (marijuana) joints. They had guns, the best motorbikes and money so I started running errands for them."

Penhaul: Didn't you have any big dreams when you were kids?

"Red": "I always said when I grow up I would build a house for my old lady with a cement roof and plaster and paint on the walls. I dreamed I'd be able to give her money to go to the supermarket every week."

"C": "I dreamed of being a professional soccer player. I was pretty good. But I never got the chance."

Penhaul: Do you think you've made your mothers proud by killing people?

"Red": "I once gave my mum a wad of cash after I did a job. She took the wad and slapped me in the face and told me not to bring that cursed money into the house. She begged me to get out of that life. She was afraid they would kill me."

"C": "My mum knows nothing about this. I guess she imagines because she tells me to take care otherwise I'll wind up dead. But she doesn't know for sure."

Penhaul: What did your first contract hit feel like?

"Red": "You kill the first one and you panic for a few days. You're nervous. But then you kill the second one and that's a kind of a medicine. It takes the pain away that you were feeling after the first killing."

"C": "The first time is really f***ed up. I nearly went mad. You see a cop and think he's going to arrest you. I was 16 or 17. That was my first time. I hardly even wanted to eat. But then you carry on and kill this one and that one. You earn money. After I killed somebody the first time I bought my first decent pair of sneakers.

"It's not so tough now. Sometimes you kill somebody and you know they were going to kill you. It's not a question of conscience. It's a question of kill or be killed."

Penhaul: Don't you feel any remorse?

"C": You know you messed up when you go to the wake and see people crying and you know it's your fault. But I don't back down from a killing because I know if somebody comes after me they won't back down."

"Red": "I've got feelings and sometimes you sit down and think what a shame. But the person who's trying to shoot you isn't going to think the same. You're not killing somebody for the fun of it. If you don't mark your territory then you're a nobody."

Penhaul: So, apart from the money, why do you do it?

"C": "To gain respect round here you have to be a mother f***er. You've got to be a bastard so people respect you. If you're quiet and respectful everybody takes advantage. But if they know you're a mother f***er who'll bust their ass at the first sign of trouble then they respect you and your family."

Penhaul: Are you killing innocent people?

"C": "I never kill somebody who doesn't deserve it. Sometimes I'll hunt down a "patient" for a week just so that I don't make any mistakes. You can't go and kill somebody just because you want to. You have to ask for permission from the big guys who control us. You explain to the "old man" and he gives the final word."

Penhaul: Are you ever on the receiving end of bullets?

"Red": "They once shot me four times at point blank range. I heard them laughing as they walked away and one came back and kicked me in the head for good measure. When I got better he was the first one I killed. I've been shot 17 times. Well let's call it 19 if you count the ones that just graze you. They say some bodies have divine protection. Let's hope mine is one of them."

Penhaul: Why don't normal citizens just turn you in? Because they're afraid?

"C": "The community collaborates with us. We give them food parcels and we throw parties for them and give toys to the kids. We don't mistreat everybody, just the ones who deserve it. We don't kill innocent people."

Penhaul: Do you want to get out of this life?

Penhaul: Do you see any quick end to the current cartel violence in Medellin?

"C": "We've survived one war, then another and now this one. I can't see it all ending. I don't think that will happen. If you kill two or three people there's four or five more behind him who want to kill you."