(CNN) -- Thousands of people took to the streets of Puerto Rico on Thursday, paralyzing commercial activity in downtown San Juan to protest government budget cuts that are expected to result in at least 13,000 layoffs. 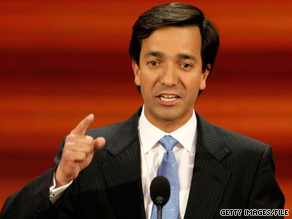 The one-day general strike started at dawn and culminated at noon with a rally at the Plaza las Americas mall. Organizers said at least 100,000 people took part in the rally and thousands more stayed home from work.

There was no independent verification of the turnout.

Confrontations between police and students blocking a highway in Puerto Rico eased late Thursday afternoon after the rally, which ended at 2:30 p.m.

But some students refused to leave a highway where they had blocked traffic, the news outlet primerahora.com said. When police stepped up their presence, the students confronted them and burned a tire, but there were no reports of violence or arrests.

"If things like this had happened in Washington, the capital of the free world, there would be prisoners now," said Gov. Luis Fortuño, whose money-saving efforts were the focus of the demonstrators' ire. "Instead of looking behind, we have to look ahead."

Victor Villalba, president of the Puerto Rican Federation of Workers, lauded the turnout and criticized government efforts at privatization.

"They will have to pass over the bodies of thousands and thousands of Puerto Ricans before turning the government over to private businesses," Villalba told the crowd.

"Today we said, 'Present,'" she said. "Tomorrow we will say, 'Present,' because teaching is by the public, for the public."

University students, teachers and clergy leaders were among those who joined the strike.

Negotiations between police and protesting students continued late into the afternoon. Methodist Bishop Juan Vera, a strike leader who had spoken at the rally, was one of the lead negotiators.

"We can feel how the soul of a whole people vibrates," Vera said.

At least six demonstrators required medical attention for dehydration and high blood pressure as a result of the heat and sun, the primerahora Web site reported. One woman was taken away in an ambulance.

"Everyone has the right to express themselves and we will guarantee that right," Fortuño told CNN affiliate WAPA TV in a morning interview. "The important thing is that we do it with respect, that we do it with order and that we understand that each of our rights ends where the other person's begins."

News media reported no major incidents at the protest sites. Some University of Puerto Rico students got into shoving matches with police at the mall before the noon rally but no arrests were reported, said primerahora.com.

The mall's windows and doors had been covered with plywood and it was closed for the day. Its 3,000 employees and 300 stores, restaurants and banks make it the Caribbean's largest.

The demonstrators oppose Fortuño's demand that nearly 17,000 workers be laid off to help close a $3.2 billion budget gap.

McClintock said Thursday that the true number of public-sector job cuts, slated to take effect next month, will likely be closer to 13,000.

According to the U.S. Bureau of Labor Statistics, Puerto Rico's unemployment rate exceeds 15 percent. Some analysts expect the layoffs to propel that rate to at least 17 percent.

In a statement issued Thursday, the governor's office pointed out that the island's economic downturn started in 2005, three years before the recession hit the U.S. mainland.

According to the statement, about 70 percent of Puerto Rico's budget is dedicated to salaries and benefits for government employees. The U.S. protectorate, the statement said, has more government employees in proportion to population than any state. Its efforts are not unusual. Forty-three of the nation's 50 states have implemented some form of payroll reduction, hiring freeze or layoffs, the release said.

The government already has cut 10 percent in operating expenses by cutting back on official vehicles, cell phones and credit cards, and has instituted 10 percent pay cuts for the governor and agency heads through next year, the announcement said.

All About Puerto Rico • Unemployment Rate