(CNN) -- Some 2,000 police officers patrolled the streets of Rio de Janeiro Sunday after a bloody confrontation between rival drug gangs and authorities that killed 14 over the weekend, including two police officers. 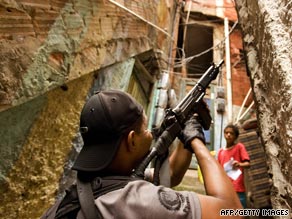 A policeman advances through an alley of Rio on March 25, 2009, during an anti-drug operation.

But the atmosphere in general appeared calm in the slum known Morro dos Macacos in northern Rio, where the day before crossfire between two gangs left 12 dead, including two police officers who died when their helicopter was shot out of the sky. Residents had also set eight buses on fire during the clashes in an attempt to divert the attention of police.

"This was truly one of the worst incidents of this type," one local resident told CNN en Español, who declined to give his name for fear of his safety. "It was like a scene from a real war. It was like the world would end, lots of bullets, lots of noise."

Rio's secretary of public security, Jose Mariano Beltrame, said the helicopter was likely brought down by .30- and .50-caliber machine gunfire, the news agency said. Four other police officers onboard were injured.

Beltrame on Sunday said that despite the city's crime, there is no reason for people to doubt the government's ability to host the Olympics.

"What I say to the (International Olympic Committee) and the public is this: we have historic problems. But we also have projects and proposals. We have security policies both to fight and to pacify," he said.

Last year, a wave of violence in Rio led to protests in December by a group called Rio de Paz. The group said 9,000 people had been slain since January 2007. Many of the deaths were caused by clashes among drug traffickers fighting for territory in Rio's slums and poor neighborhoods, said the group's president, Antonio Carlos Costa.

All About Brazil • Rio de Janeiro