(CNN) -- A raging blaze at a fuel storage complex in Puerto Rico lit up the night sky Friday near San Juan as firefighters battled to keep it from spreading further. 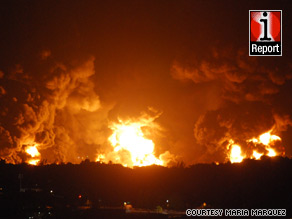 Fifteen of the 40 tanks at the Caribbean Petroleum Corp. facility in the city of Bayamon were ablaze more than 19 hours after an explosion of unknown origin rocked the complex, Gov. Luis Fortuno said at an evening news conference. The governor had put the tally at 11 a few hours earlier.

"I don't think there's ever been a fire like this in Puerto Rico," Fire Lt. Jose Atorre told CNN affiliate WLII-TV.

The fire started shortly after midnight, when at least one fuel tank exploded. Residents described a surreal scene after the blast woke them from their sleep and shattered windows miles away.

"I was in bed and all of a sudden heard this really horrible sound, so I ran upstairs and thought the whole town had blown up," said Teo Freytes, who filed an iReport for CNN.

"The explosion blew out windows here in Old San Juan," he said. "It's still burning outrageously."

Others woke up Friday morning to an extremely unusual sight.

"I didn't expect to see a mushroom cloud from my house," said Justin Gehrke, a U.S. Army civilian employee who also filed an iReport.

Fortuno said he declared a state of emergency for the area so Puerto Rico can get aid from the Federal Emergency Management Agency.

The storage and refinery complex sits near San Juan's bay, and Fortuno said officials are working to protect the water from being affected.

"We have serious worries that the bay or other bodies of water could be contaminated," he said.

"We have been monitoring the water visually and we have installed preventive pads and other material to contain a spill," said Pedro Nieves, chairman of the Puerto Rico Environmental Quality Board. "No oil has reached the water."

But Nieves said that Caribbean Petroleum has a history of spills and "there was potential that it had contaminated ground water." He said he did not have any specifics on hand and that his organization was more focused on containing the current problem of fire and smoke. The U.S. Environmental Protection Agency did not immediately return calls about the company's environmental history.

Newspaper and TV reports said a 4-inch pipe from a lagoon on the complex was broken, preventing firefighters from using 2 million gallons of water from the lake to battle the blaze. About 150 area firefighters and 215 National Guard personnel were battling to keep the blaze from spreading.

One person suffered smoke inhalation and was taken to a hospital, Fortuno said. At least 350 people were evacuated to a nearby stadium. iReport.com: See, share, send images of the explosion

The smoke can be toxic for people with breathing conditions and officials have asked nearby residents to stay away, the governor said.

"This is a tremendous amount of smoke, and fire contains all kinds of irritants and this is oil that is burning," said Mary Mears, spokeswoman for the Environmental Protection Agency region that includes Puerto Rico. "It's smoke, so you're going to notice coughing, tearing, maybe a sore throat."

The wind shifted to the north Friday morning, blowing most of the smoke over less-populated areas and the Atlantic Ocean. The smoke plume also is rising 5,000 feet straight up before starting to drift, which keeps it away from people on the ground.

But the wind was expected to change Saturday morning, blowing the smoke over a large part of the island west of the fire.

Officials also are concerned that rain mixed with the smoke could lead to acid rain. Authorities urged residents to bring in animals and their food and for people not to go out during or after any precipitation.

The National Guard Combat Support Team was helping to monitor air quality and local environmental officials were working with the U.S. Environmental Protection Agency to install monitors near the blaze.

Officials will investigate the cause of the blaze. Puerto Rico is a U.S. protectorate, which means federal officials are involved. The Bureau of Alcohol, Tobacco and Firearms sent a team of fire investigators, but have yet to determine whether the fire was an accident or set deliberately, said Orlando Felix, ATF Resident Agent in Charge of the Puerto Rico office.

"We have found graffiti in two different locations," FBI Special Agent Harry Rodriguez told CNN. "We are looking into the matter as part of this investigation with respect to the fire at the fuel-holding facility."

Rodriguez and San Juan police spokeswoman Maria Del Pilar Bon said they did not know what or who ACNF is.

Speaking at a news conference Friday afternoon, Fortuno said all leads must be followed.

"There could be many reasons [for the fire]," he said. "We're not going to guess. But there has to be an investigation."

Caribbean Petroleum, which owns 200 gas stations in Puerto Rico and several inland distribution facilities, supplies much of the island's fuel. But Department of Consumer Affairs Secretary Luis Rivera Marin said there is enough fuel on hand for 24 days, and 16 million gallons of gasoline were in transit to the island. He also froze prices at the level they were at 8:06 a.m.

Officials transferred 295 inmates from a high-security prison in the area to other facilities, which they declined to identify for security purposes. Another 1,600 prisoners were moved from another nearby facility. Some 200 extra prison officials were brought in to handle the transfers, Fortuno said.

Video on WLII showed a caravan of white vans with sirens blaring transferring the prisoners,

Schools in Bayamon, San Juan, Toa Baja and Catano were closed, as was Puerto Rico Road 28. Roads 5 and 22 were partially closed.

Flights in and out of Luis Munoz Marin International Airport in San Juan were not affected, an airport official told CNN.

CNN's Jackie Castillo and Khadijah Rentas contributed to this report.

All About Puerto Rico • Accidents and Disasters • Fires