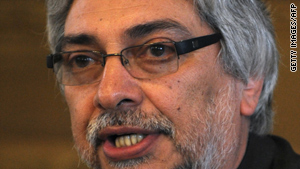 The announcement came from the armed forces themselves, not the president's office.

In his capacity as commander-in-chief, Lugo named replacements for the heads of the army, air force and navy, according to a statement from the armed forces.

One day earlier, Lugo had addressed -- and dismissed -- reports of a possible coup.

"In recent days rumors have surfaced about the placement of bombs, new kidnappings, assaults, coup d'etats," Lugo said at a news conference Tuesday.

"We are a friendly, participative government, willing to analyze the criticisms we receive, but don't confuse that for a moment with a showing of weakness," Lugo said, adding that nothing would remove him from the presidential palace until the end of his term in 2013.

Lugo, who was elected to a five-year term last year, is a former Catholic bishop.

His victory brought an end to 61 years of one-party rule in Paraguay, but the honeymoon did not last long.

In April, Lugo admitted he fathered a child during the period he was still a priest, and that he may have possibly fathered more. The revelation, which came as a shock to most, hurt his campaign image. Calls for his resignation began then and have continued, as Lugo has struggled to push reforms through a majority-opposition legislature.

The new military commanders will be sworn-in at a ceremony Thursday morning.