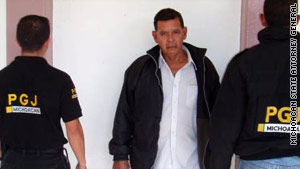 MEXICO CITY, Mexico (CNN) -- Mexican authorities have arrested a 78-year-old man on charges he killed a woman he believed was a witch who had put a spell on him.

Santiago Iniguez Olivares is accused of bludgeoning Modesta Navarro Nieves and her husband at their home in the mountainous Guadalupe del Cobre community in April 1998, the Michoacan state attorney general's office said Thursday. The husband survived.

Olivares had been on the run until recently, when he returned to Guadalupe del Cobre because he thought the 11-year-old murder had been forgotten, the attorney general's office said.

Authorities arrested him while he was walking to a bus station, the Apatzingan Valley Information Agency said on its Web site.

According to officials, Iniguez Olivares went into the woman's home, accused her of putting a witch's spell on him and started to beat her with a stick. The woman's husband then came home and Iniguez Olivares turned the club on him before fleeing, the attorney general's office said in a release.

Guadalupe del Cobre is a remote village in western Mexico.

This is second case in 18 months involving the slaying of someone accused of witchcraft.

Authorities arrested a woman in June 2008 in central Mexico on charges that she had killed another woman for similar reasons, La Voz de Michoacan newspaper said.