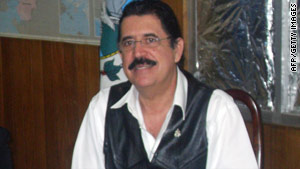 (CNN) -- Deposed Honduran President Jose Manuel Zelaya won't support the upcoming presidential election and will ask his supporters to do the same, Zelaya said in a letter to President Obama dated Saturday.

Zelaya's rejection of the vote scheduled for November 29 is the latest obstacle to a resolution to the June 28 coup that pushed him out of power. It also puts into question the strength of a breakthrough agreement signed between him and de facto Honduran President Roberto Micheletti last month.

The agreement called for a unity government to lead Honduras until a new president is elected this month. The pact also stipulated that the nation's congress would vote on whether Zelaya would be returned to power, though reinstatement was not guaranteed.

Congress has delayed its vote on Zelaya, opting to ask for an opinion from the country's supreme court, which is yet to come.

Zelaya, who has taken refuge inside the Brazilian embassy in the Honduran capital since sneaking back into the country, wrote in his letter to Obama that the agreement was "rendered useless because of the unilateral non-compliance of the de facto government." CNN obtained a copy of the letter.

The accord was considered a breakthrough because both sides took a risk. Zelaya risked that the congress would not vote to reinstate him, and Micheletti risked that Zelaya would return to power. This had been the largest sticking point in negotiations.

In his letter to Obama, Zelaya also expressed dismay at a shift in stance by the United States.

Originally, the United States backed Zelaya's restitution as a necessary condition for the recognition of the outcome of the November 29 election. Since the agreement was signed, however, U.S. officials have said that they will recognize the vote regardless of whether congress allows for Zelaya to return.

Now, Zelaya says he will not accept any further negotiation that may return him to power, saying it would amount to helping justify the coup.

"In my position as president elected by the Honduran people, I reaffirm my decision that from this date forward, no matter what, I will not accept any agreement to return to the presidency," he wrote to Obama, asking the president "for a quick reply."