BANGKOK, Thailand (CNN) -- At least 59 people were killed and more than 200 others injured early Thursday after a fire broke out at an upscale Bangkok nightclub where about 1,000 revelers were ringing in the new year, Thai police said. 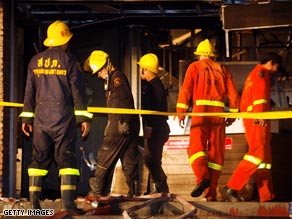 Rescue officials survey the scene of the nightclub fire in Bangkok, Thailand.

Most of the victims died from smoke inhalation or were trampled in a rush to get out of the club. Thirty bodies have been identified: 29 Thai nationals and one Singaporean, according to police.

The fire began at the nightclub Santika about 12:35 a.m., police said. Rescue officials said 226 others were injured, including several foreigners.

Two Americans were injured in the blaze, a U.S. State Department official said. The official did not release the victims' names or the extent of their injuries but said the department was in contact with them.

Steven Hall, a British national who was hurt in the fire, told CNN that flames began to spread along the ceiling above the stage where a band and DJ were performing. But some people appeared to believe that it was part of the performance.

"At the same time there were people rushing to get out, there were other people who seemed to be lacking a sense of urgency and didn't seem to realize what was going on," Hall said.

The blaze started near a stage where fireworks were being used as part of a performance on the club's closing night, said police Maj. Gen. Chokchai Deeprasertwit.

"It may have been caused from sparks, but we don't know if it was sparks from guests or from the nightclub's countdown display on the nightclub stage," he said. iReport.com: Eyewitness captures scene of deadly aftermath

Hall said his wife escaped ahead of him, but he got caught in a crowd.

"The lights went out, and at that moment, my back started burning, and I was breathing in hot air," he said.

He said he saw victims being rushed out on stretchers and spoke to witnesses, including a fellow Briton who saw fireworks being lit onstage.

"He immediately ran out of the building, but immediately when he'd done that, the lights went out, and he couldn't see," Jones said.

The club is in one of Bangkok's busiest commercial districts. Its Web site features images of bands and DJs performing on both indoor and outdoor stages, and says that it "innovatively blends the comfort of nature with the excitement of the Bangkok nightlife."

The site advertises the club's New Year's party, which was named "Goodbye Santika."