(CNN) -- Gu Gu is not your typical soft and cuddly giant panda. 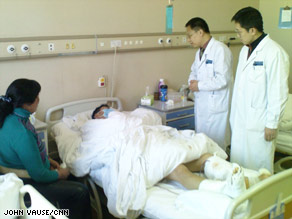 Zhang Jiao was attacked by Gu Gu the panda when he fell into the pen at the Beijing Zoo on Wednesday.

For the third time, he's tasted the flesh of an unwitting intruder in his pen at Beijing Zoo.

His most recent victim was 28-year-old Zhang Jiao, who told CNN he fell into the panda pen Wednesday while trying to catch a small toy thrown by his young son.

"My son and I were playing with a panda doll, throwing it to each other, when I dropped with the toy" into the pen, Zhang said.

The barrier around the pen is about 5 feet tall, but on the other side is a drop of 9 to 10 feet, and Zhang says he could not climb out.

That's when Gu Gu went on the attack.

The 240-pound giant panda sunk his teeth into Zhang's left leg before moving on to the right leg.

"The panda is a national treasure, and I love and respect [him], so I didn't fight back," Zhang said. "The panda didn't let go until it chewed up my leg and its mouth was dripping with my blood."

Zhang said he never imagined a panda could be so vicious.

"I always thought they were cute and just ate bamboo," Zhang said.

According to Dr. Wang Tianbing, who treated Zhang, his wounds were severe, especially the damage done to the muscle and ligaments in his left leg.

"Normally, we think the panda is very tender animal, but actually it's a bear, not a cat. If the animal thinks it will be hurt by human beings, it is very dangerous."

Wang should know. In 2007, he treated another one of Gu Gu's victims, a 15-year-old boy who climbed into the pen to get a closer look. A year earlier, state media reported that a drunken tourist tried to hug the panda, who bit him. In an odd twist, the tourist reportedly bit back.

But being an endangered species and much-loved national icon means there's no "three strikes and you're out" for Gu Gu.

In fact, there's a possibility Zhang may face charges for entering the panda pen.

Zoo officials did not respond to CNN's request for an interview but are reportedly considering new measures to keep tourists out of Gu Gu's pen.