(CNN) -- A Nepalese journalist who reported on women's rights and wrote several articles criticizing the dowry system was hacked to death in her room, a media rights group said Monday. 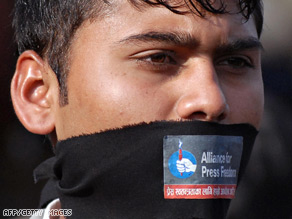 A Nepalese journalist takes part in a protest last month demanding more freedom for the press.

The killing of Uma Singh, 26, is part of a growing and troubling pattern of violence directed at reporters in the South Asian country, the Federation of Nepalese Journalists said.

In protest, journalists throughout Nepal are expected to stage demonstrations Tuesday, calling on the government to ensure their safety.

"If the government is not ready to provide any kind of security to journalists, it will be very difficult to do journalism in a free mode," said Dharmendra Jha, president of the federation.

Singh wrote for a daily newspaper and reported for a radio station in Janakpur, about 240 km (150 miles) southeast of the capital city of Katmandu.

When she got home from work Sunday night, a group of about 15 men barged into the room she rented at a house and hacked her with sharp objects in full view of other boarders, Jha said.

"I am very very shocked," said Jha, who arrived in Janakpur Monday to probe the killing. "She was my student and I brought her into active journalism."

Authorities do not have a motive for the killing. In some of her articles, Singh spoke out against the dowry system, where a bride's family is forced to give cash and property to the groom's family before the wedding.

Also Sunday, a group of men ransacked the house of another journalist, leaving a cross on her door and telling her it was her turn next, media groups said.

Police do not know if the two incidents are related.

In recent months, the number of attacks on journalists in Nepal has shot up. The federation released a year-end report, recording 284 incidents -- including three deaths and a kidnapping. The incidents also include shutting down media outlets, burning copies of magazines and beatings.

Some of the assailants have ties to the Communist Party of Nepal, the largest party in Nepal's coalition government, according to New York-based Human Rights Watch.

The party is led by Pushpa Kamal Dahal, or Prachanda -- a man who led a decade-long bloody insurgency before being sworn in as prime minister. During the decade-long civil war, Maoist forces under him carried out numerous attacks on journalists they believed were opposed to their cause, Human Rights Watch said.

And after he became prime minister, Prachanda issued a public warning to journalists while addressing a massive crowd in Katmandu: "Now we will no longer tolerate criticism as we have already been elected by the people."

"The problem we're facing is the problem of impunity," Jha said. "There are many armed groups in plain sight. The government has to hold them accountable. Otherwise, we are not safe."