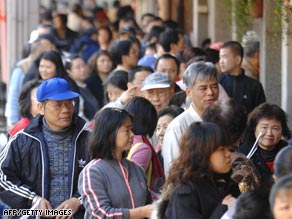 People line up to receive $108 U.S. dollars worth of shopping vouchers in Taipei, Taiwan, on Sunday.

Any of the island's 23 million men, women or children qualify for the money, a combination of a lunar New Year gift and economic stimulus package designed to pump about 86 billion ($2.6 billion U.S.) into the economy.

By Sunday night, 91.3 percent of eligible citizens had picked up their vouchers, and malls were flooded with shoppers, Interior Minister Liao Liou-yi said.

The vouchers are good through September. But one major retailer, the Carrefour chain, said its Sunday receipts were up about 30 percent from normal -- and with Chinese New Year just around the corner, many appeared ready to use the money for holiday groceries.

Even President Ma Ying-jeou picked up vouchers for all four members of his family, encouraging people to spread the use of the vouchers over days, Taiwan's Central News Agency reported.