(CNN) -- A "handful" of United Nations staff members are working around the clock to save a growing number of children caught in heavy crossfire between government forces and Tamil rebels in Sri Lanka's volatile northeast, a U.N. spokesman said Saturday. 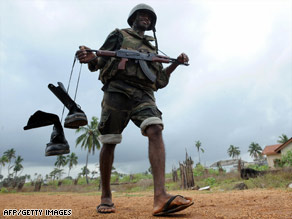 Children as young as 4 months old are being treated in local hospitals for shrapnel injuries and other "wounds of war," spokesman James Elder told CNN.

Humanitarian groups say as many as 250,000 unprotected civilians are trapped in the crossfire between government troops and rebel forces in northern Sri Lanka.

The fighting has created a "nightmarish" situation for civilians living in the conflict zone, Elder said.

An emerging shortage of humanitarian supplies and diminished access to clean water, sanitation, and food are compounding a crisis that has humanitarian agencies fearing for the safety of civilians, he said.

The Liberation Tigers of Tamil Eelam, commonly known as the Tamil Tigers, have fought for an independent homeland for the country's ethnic Tamil minority since 1983. The civil war has left more than 70,000 people dead.

U.N. Secretary-General Ban Ki-moon has called for the safety of civilians as humanitarian groups try to provide aid to people trapped in the region.