TOKYO, Japan (CNN) -- Japan's Mount Asama erupted early Monday, sending a plume of light ash more than a mile into the sky and prompting emergency officials to restrict travel near it. 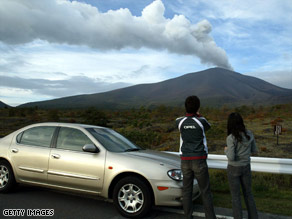 They issued a level three warning, moderate on the alert scale, which prevents people from entering within a two-and-a-half-mile (4 kilometer) radius of the volcano, according to Jun Funasaki with the Japan Meteorological Agency. There were no reports of injuries or damage.