ISLAMABAD, Pakistan (CNN) -- Hina Khan used to take her life in her hands every morning just to get to school. 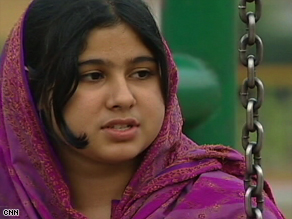 When she stepped outside her door, the 14-year-old knew that ahead could be suicide bombings, gunfights, kidnappings and beheadings. Death threats were made against her, other students and teachers every day simply because they went to a girls' school in Pakistan targeted by Taliban militants.

She used to live in the Swat Valley, a scenic mountainous region once popular with tourists and dubbed "Pakistan's Switzerland." But those were the days before militants moved in, "striking the fear of God" into residents with violence as they pushed for compliance with stricter moral and religious standards -- so-called Talibanization.

Now she is safer, 100 miles away in Pakistan's capital, Islamabad, but her thoughts are often with her friends in Swat, near the border with Afghanistan.

They do not even go to school now, as authorities gave in to militant demands to shut all girls' schools. As many as 200 schools, mostly for girls, have been destroyed since November 2007 when the Taliban began their campaign to take control of the Swat Valley and surrounding areas.

"They have problems there," Hina said of those left behind.

Watch how the Taliban's power has changed the valley »

"How can they leave their land, their home? Why come here? Here it's expensive, and they are all poor. They can't come here. And I feel really bad. All my friends are there. There is no one here."

The targeting of girls' schools shows an anti-women bias by the militants, who advocate an extreme following of a version of Islamic law, according to Islamabad-based human rights activist Tahira Abdullah. She adds it's almost as if the Taliban does not want women to exist.

Abdullah is blunt in her assessment of the situation. "Right now, [Swat Valley] is under the control of the Taliban," she said.

But the accusation of complacency is rejected by Maj. Gen. Athar Abbas, spokesman for the Pakistan military.

"There is success," Abbas said of operations against anti-government forces in the tribal areas near the border with Afghanistan. "The success rate of the army's operation is pretty good in these areas."

He attacked critics of the military operation for failing to recognize the sacrifices of the armed forces. About 1,300 Pakistani soldiers have been killed in operations against militants since 9/11, he said. And he said the fight was made harder because the army lacked modern equipment such as night-vision goggles and unmanned drones.

But the military's continuing fight to secure the area is alienating those it is supposed to help. Some residents said the government is doing more damage than the Taliban ever did.

"If the government doesn't stop this cruelty, finally we will be forced to come here, and this parliament, we will set it on fire, too," said Israr Ali, standing outside the parliament building in Islamabad recently.

Ali had traveled there with hundreds of others from the tribal regions for a protest organized by an Islamic political party in the federal capital.

He said army operations have turned his home into a war zone and that shelling from army helicopters has destroyed buildings and killed his friends and neighbors. The Pakistan Institute for Peace Studies reported that in 2008 at least 7,997 people were killed in terrorist attacks, clashes between security forces and militants, military operations, incidents of political violence, sectarian strife between tribes and border clashes.

More than 230,000 people have fled their homes as a result of fighting in the tribal areas and the Swat Valley, according to a report last month by the U.N. Office for the Coordination of Humanitarian Affairs.

Those people include Hina, who fled with her parents and four younger siblings so that they could continue their education.

Hina said she is still scared of the Taliban. But she also is focused on school and her dream to become a doctor. And when she does that, she has another goal -- to help her country "fix problems."