(CNN) -- An Internet auction to sell off the plaster cast that New Zealand Prime Minister John Key wore when he broke his right arm has raised close to NZ$ 20,000 for charity. 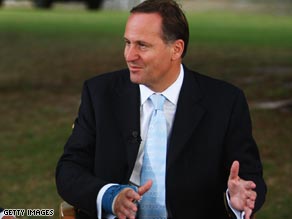 John Key wears the cast during a TV interview on Friday.

The online auction ended Sunday with a winning bid of NZ$18,500 (US$ 9,362), according to the New Zealand shopping Web site TradeMe, which conducted the bidding.

The prime minister broke his arm in two places on January 17 when he tripped on some stairs at a Chinese New Year event in Auckland.

The money will benefit the Fred Hollows Foundation in blindness prevention programs in the Pacific.

The TradeMe listing said the foundation estimates there are about 5,000 blind people in the Islands, mainly needing cataract surgery. Another 15,000 suffer from poor vision and need eyeglasses.

"I am very surprised it got to that ... but I am delighted," New Zealand's national news agency quoted Key as saying about the winning bid.

The cast, which was removed this weekend, is in "excellent condition," Key said. "Though I don't know whether is is $20,000 worth of condition."

Bidders and curious clickers posed more than 180 questions during the auction period.

"Does it come with the arm?" asked one. Another wanted to know if there was a chance of the the winner and Key "exchanging numbers and hanging out in the future if we hit it off?"

A third asked: "If I was successful with this auction do I also have ownership and rights to any genetic material that may (have been) left inside the cast and the right to clone it if I choose to?"

That person was told he or she would have to "negotiate with John's lawyers for that particular right."

The winning bidder was a headstone maker from Wellington, according to NZPA, the news agency.