UNITED NATIONS (CNN) -- Sexual exploitation and forced labor are the most common forms of human trafficking in the world, a new report from the U.N. Office on Drugs and Crime said. 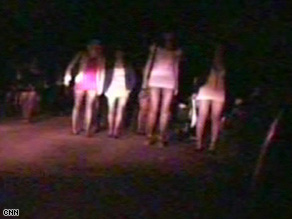 Aid agencies say young women are being forced into prostitution across Russia's capital.

The "Global Report on Trafficking in Persons" is based on data from 155 countries and offers a global assessment of human trafficking and efforts to fight it.

In about one-third of the countries that provided information on the gender of the traffickers, women made up the largest proportion of traffickers. In Central Asia and Eastern Europe, women make up more than 60 percent of those convicted of trafficking.

"In these regions, women trafficking women is the norm," said Antonio Maria Costa, the head of U.N. Office on Drugs and Crime. "It is shocking that former victims become traffickers. We need to understand the psychological, financial and coercive reasons why women recruit other women into slavery."

The second most common form of human trafficking is forced labor, or slavery, making up 18 percent of the total, although the writers of the report say it may be underreported.

"How many hundreds of thousands of victims are slaving away in sweat shops, fields, mines, factories, or trapped in domestic servitude?" Costa said. "Their numbers will surely swell as the economic crisis deepens the pool of potential victims and increases demand for cheap goods and services."

Regardless of the type of human trafficking, nearly one in five of its victims were children, according to the report.

"Children's nimble fingers are exploited to untangle fishing nets, sew luxury goods or pick cocoa," the report said. "Their innocence is abused for begging, or exploited for sex as prostitutes, pedophilia or child pornography. Others are sold as child brides or camel jockeys."

In a 2008 report on human trafficking, the U.S. State Department listed Kuwait, Oman, Qatar and Saudi Arabia as destination countries with widespread trafficking abuses, particularly forced laborers trafficked from Asia and Africa who are subject to restrictions on movement, withholding of passports, threats and physical and sexual abuse.

The report found those countries made feeble efforts to rescue victims and prosecute traffickers.

The U.N. Protocol Against Trafficking in Persons has been in place since 2003. The number of member states "seriously implementing" the protocol has doubled, according to the U.N. report. But it singled out Africa for lacking the necessary legal instruments and the will to crack down on human trafficking.

"There are strong international agreements to ensure that people's lives are not for sale," Costa said. "I urge governments to enforce them."

All About Human Trafficking • United Nations