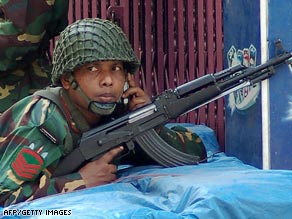 As dawn broke, the rebelling troops with the Bangladesh Rifles (BDR) allowed government officials entry into the headquarters in the capital city of Dhaka -- the scene of a day-long standoff Wednesday. The troops agreed to lay down their arms after Bangladeshi Prime Minister Sheikh Hasina agreed to offer them amnesty.

Ministers went door to door within the compound's officers' quarters to assure frightened women and children it was safe to come out.

In addition to military officials and BDR brass, the dead and wounded included passersby, including a rickshaw puller, struck by stray bullets during the gun battle, the Dhaka Medical College Hospital said.

CNN was not immediately able to confirm the exact casualty count, with medical officials saying a final number will come after they had a chance to comb through the premises looking for bodies.

At around 4:30 a.m. (10:30 p.m. GMT) Thursday, Bangladeshi TV channels broadcast video of Home Minister Sahara Kahtun telling rebelling paramilitary officers in the room that she could assure them the government would listen to their grievances. As she spoke, officers deposited weapons and ammunition onto a table in front of her and into piles on the floor.

The video was initially broadcast on state run TV station BTV. Various private networks picked it up soon after.

The Rifles is a paramilitary force responsible primarily for guarding the country's borders. The force, more than 65,000-strong, also takes part in operations such as monitoring polls.

The troops staged their rebellion on the second day of BDR Week when officers and troop members from various BDR outposts along the border were in the capital for celebrations.

At least 5,000 -- maybe more -- BDR personnel were inside the compound in the Pilkhana area of the capital when the mutiny occurred about 7:45 a.m. local time Wednesday, said Mohammed Sajjad Haider, spokesman for the information ministry.

Their mobile phones were turned off, making it difficult for the government to get a handle on the situation, he said.

The rebelling troops were low-ranking members of the BDR, akin to infantrymen, who were angry at the way they were treated by their superiors, Haider said.

"They have several demands," Haider said. "They want pay parity with the army, they want job security, they want better food rations."

The mutiny is the most serious crisis for Bangladesh's newly elected government, which came into power in December after two years of army-backed rule.

Throughout the day and into the night, curious onlookers gathered outside the compound -- only to scramble for cover as sounds of gunfire periodically pierced the air.

Plumes of black smoke coming from inside the compound could be seen for miles throughout the capital.

Occasionally, the rebelling troops -- red bandannas covering their faces and guns slung over their shoulders -- walked past the closed gates of the compound, chanting, "We have been deprived for a long time, we have deep grievances."

"I've been hearing gunfire all morning," said Zunaid Kazi, a San Diego, California, resident who is staying at a house a few blocks from the headquarters.

Watch as Kazi describes what he saw and heard »

"There will be a little lull and then the sustained gunfire will pick up again," he said. "I can hear military helicopters in the sky. It's very rattling."