For sale: One life in China

BEIJING, China (CNN) -- Chen Xiao had pretty much given up making her own decisions and so decided to throw open her life to the whims of China's hundreds of millions of Internet users, known in China as netizens. 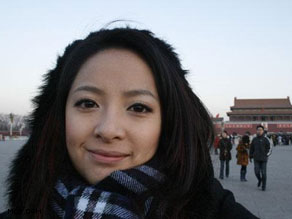 Beijing resident Chen Xiao decided to put her life up for sale after an unhappy 2008.

"It's your right to arrange Chen Xiao's life, and it's my obligation to serve you," read her online shop.

Since December, Chen has been allowing others to decide what she will do each day, because, for the most part, last year was awful, she said. Her hometown was hit by blizzards, her country rocked by a devastating earthquake, friends divorced and her clothing shop went bankrupt.

"Every time I had a plan for what I wanted my life to be like, nothing would come of it. It was very disappointing. I figured if other people came up with things for me to do, I might stumble upon something new and better," she told CNN.

What she stumbled upon was not only a new life but a new way to make a living. She charges about $3 an hour, and she's been asked to do almost everything from delivering pet food to caring for stray cats to taking a hot lunch to a homeless man.

What surprised her the most was not so much the varied requests but being able to find happiness in the process.

"If somebody asks you to do something, something simple, and you do it, it can make you very happy. You can change from a gloomy person to a very bright one. It can help give you a new sense of self-esteem," she said.

So far, the most meaningful assignment she was given was attending a child's birth -- the father was a complete stranger who just wanted someone to take pictures and share the moment.

There are limits to what she will agree to do. She will not do anything illegal, immoral or violent, but she said that has not stopped some from asking.

"When I first started there was this man who would send me these really disgusting text messages. His words were over the top... nauseating," she said.

There was also a man who wanted to meet her for a few private hours at a ski chalet. When she turned up with a friend to take photographs, he backed out and then demanded a refund, but Chen refused.

In many ways she is just a glorified errand girl, but with a unique China twist. Chen is another example here of how in China the Internet is crossing over from cyberspace to the real world.

Chen does not know how much longer she will keep taking cyberrequests. For now it is a good way to survive the financial crisis when many others are losing their jobs and businesses are going broke.

"When people stop needing me, I'll go back to my original life. But I don't know what will come," she said.

China's netizens will most likely make that decision for her as well.