NEW DELHI, India (CNN) -- A Pakistani man using "colonel" as a title is one of about three dozen people wanted over November's terrorist attacks in Mumbai, but his connections with the Pakistani army have not been established, Indian prosecutors say. 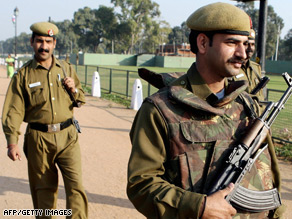 "This is all a matter of investigation," special public prosecutor Ujjwal Nikam told CNN Thursday when asked if India thought he had links to the Pakistani army.

Neither is it clear whether the "colonel" belonged to the Pakistan-based militant outfit Lashkar-e-Tayyiba, which is blamed for the Mumbai siege, Nikam said.

But India, the public prosecutor added, had "ample evidence" of his involvement in the November attacks.

Authorities say Mohammed Ajmal Kasab, the only surviving suspect accused of taking part in the Mumbai siege, faces a multitude of charges, including murder and attempted murder.

Speaking outside Qila Court in Mumbai, Nikam said Kasab didn't attend the hearing for security reasons. The next hearing is set for March 9.

A 21-year-old Pakistani, Kasab was one of 10 men accused of participating in the coordinated sieges on buildings such as the Taj Mahal Palace and Tower and Oberoi-Trident hotels, Mumbai's historic Victoria Terminus train station and the Jewish cultural center, Chabad House.

Indian forces killed nine suspects. More than 160 people, including many foreigners, died during the three days of attacks that began November 26.

Authorities said Kasab was trained by Lashkar-e-Tayyiba, which was banned in Pakistan in 2002 after a terrorist attack on India's parliament. The group denied responsibility.

Nikam said on Wednesday that the 50-page document describing the charges against Kasab also contains the names of 35 other suspects being sought in the crimes, many of whom are thought to be members of Lashkar-e-Tayyiba.

The prosecutor said his office hopes to finish the trial for Kasab in three to six months. He has been in police custody since November 28.

Also charged Wednesday were two men accused of helping to plan the violence, Fahim Ansari and Sabahuddin Ahmed, according to the prosecutor.

All About India • Mumbai • Terrorism