(CNN) -- A U.N. group has ruled that the detention of Myanmar democracy activist Aung San Suu Kyi is illegal under the laws of her own nation, her lawyer said. 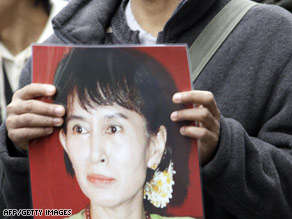 Aung San Suu Kyi is shown on a sign at a protest outside the Myanmar embassy in Tokyo, Japan, earlier in March.

A ruling from the U.N. Working Group on Arbitrary Detention has found that Suu Kyi is being held under Myanmar's 1975 State Protection Law, which allows an arrest to be renewed for a maximum of five years. The five-year period ended at the end of May 2008, according to documents that lawyer Jared Genser provided to CNN.

The working group is an arm of the U.N. Human Rights Council. Genser said the ruling by the U.N. working group broke new ground by stating that the Myanmar government was violating its own law in keeping Suu Kyi under house arrest.

"This is an important step forward, but we are under no illusions," Genser said, noting that the ruling is unlikely to free Suu Kyi. Genser is the Washington, D.C.-based legal counsel to Suu Kyi and is president of Freedom Now, a group that works to free prisoners of conscience.

Suu Kyi is a 1991 Nobel Peace Prize laureate and has spent more than 13 of the past 19 years under house arrest. Her last house arrest began in 2003 and has been periodically renewed.

Myanmar, also known as Burma, has been under military rule since 1962. Suu Kyi became a figure on the world political stage during protests in the Southeast Asian country in 1988. She was placed under house arrest before her party won the 1990 general elections, which the ruling military junta did not recognize.

Myanmar's government has scheduled elections for next year that they say will lead the nation toward democracy. Human-rights organizations have said the vote will merely extend military rule in the nation.

In October 2007, clashes erupted between pro-democracy demonstrators and government security forces. As many as 110 people, including 40 Buddhist monks, are thought to have been killed in that crackdown.

The protests were sparked by a huge fuel price increase imposed by the military government, and quickly escalated. Myanmar's military junta said in mid-October that it had detained more than 2,900 people amid the clashes.