Lights go out across planet for Earth Hour

(CNN) -- Lights went off across the world Saturday as millions of homes and businesses went dark for one hour in a symbolic gesture highlighting concerns over climate change. 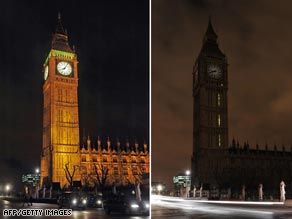 The lights go off Saturday at the Houses of Parliament and the Big Ben clock tower in central London.

The Philippines topped this year's participation for Asia, with more than 650 communities taking part in the event, according to Earth Hour's Web site.

In Dubai, iReporter Sharad Agarwal turned out the lights and sat down to a candlelit dinner with his family.

"I personally believe in going green and everything that goes with it," Agarwal told CNN.

In Australia, floodlights of the Sydney Opera House were extinguished as the city's iconic harbor kicked off events for Earth Hour. The event's Web site reported that hundreds of people lined the harbor for a glimpse of the dimming skyline at 8:30 pm.

Sydney became the birthplace of the Earth Hour campaign in 2007 when 2.2 million turned off their lights, igniting a grass-roots movement that has become a global phenomenon.

In China, illuminations at major buildings including the "Bird's Nest" Olympic Stadium and the Water Cube were extinguished as 20 cities joined in, according to the official Xinhua news agency.

Other landmarks around the world expected to join the World Wildlife Fund-sponsored event were the Egyptian pyramids, Vatican, Niagara Falls, the Eiffel Tower, the Empire State Building, the Acropolis in Athens and the Las Vegas casino strip.

CNN iReporter Marie Sager of Los Angeles, California, said she planned to hike up to the Griffith Observatory to experience the massive lights-out event.

"A good portion of the city is participating. We'll see the Capital Records sign go out. A lot of these places haven't turned out their lights in awhile," Sager said.

Event sponsors hoped participating U.S. cities would set an example for the rest of the world.

"We think we are going to have 100 million people around the world sending a message that climate change is real, and we need to take action now," World Wildlife Fund CEO Carter Roberts told CNN.

"The world is watching to see what America is going to do," he said, "because if America acts on climate change, the world will follow."

Earth Hour events got off to an unofficial start in the remote Chatham Islands in the southern Pacific Ocean where locals switched off their diesel generators, organizers said. Shortly afterward, 44 New Zealand cities and town joined in the event.

Organizers say they hope this year's event will send a message to world leaders meeting Copenhagen, Denmark, in December for a major summit on climate change.

"We are asking one billion people to take part in what is essentially the first global vote for action on climate change by turning off their lights for one hour and casting a vote for earth," said executive director Andy Ridley.