(CNN) -- The Irrawaddy, one of the world's rarest species of freshwater dolphins, have been found in surprisingly large numbers deep in the waterlogged jungles of Bangladesh. 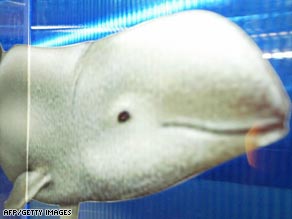 The Irrawaddy is considered to be one of the world's rarest species of freshwater dolphin.

Conservationists thought the Irrawaddy had dwindled in number to just a few hundred, but they have now counted almost 6,000 of them in the Sundarban mangrove forests and the adjacent waters of the Bay of Bengal.

The forests of the Sundarban -- Bengali for "beautiful forest" -- lie at the delta of the Ganges and two other rivers on the Bay of Bengal. Until now, little mammal research had taken place in the area.

"Every time we had done a study to look into the population (elsewhere), they came out critically endangered," said Brian Smith of the New York-based Wildlife Conservation Society, who led the study. "It was a very pleasant surprise and a shock to find that Bangladesh supports such a large number (of dolphins)."

The discovery is noteworthy because scientists do not know how many Irrawaddy dolphins remain.

The next step, they say, is to ensure the mammal's survival. One rare dolphin species -- the Yangtze River dolphin, or baiji -- is extinct. Another, the Ganges River dolphin, is critically endangered.

Some of the threats affecting the Irrawaddy are man-made. The construction of dams has reduced the flow of fresh water in many parts of Bangladesh. And the population is dwindling because the dolphins sometimes get caught in fishermen's nets.

The dolphin, which has a large, rounded head, can grow up to 8 feet in length and is related to the orca, or killer whale. It is found in large rivers, estuaries and freshwater lagoons in south and southeast Asia.

In Myanmar, the dolphins help herd schools of fish toward fishermen's boats and nets. In Bangladesh, fishermen hold them in high regard, Smith said.

"There is no market for dolphin products," he said. "In a country like Bangladesh, with protein deficiency and where food is scarce, there is a real cultural prohibition against harming them. It gives us hope because it means fishermen are very receptive to working with us."

The results of the study were shared Wednesday at a conference for marine mammal protected areas in Hawaii, and published in the winter issue of the Journal of Cetacean Research and Management.

Conservationists are now working with the Bangladesh government to establish a protected area for the dolphins.

"There are so many bad news (stories) coming out of the conservation community that this is a real sort of positive story," Smith said.