No accord at U.N. talks on N. Korea 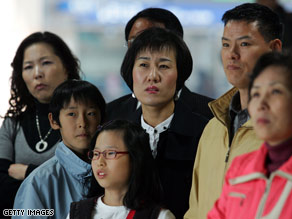 "Consultations will go on among members to see what is the appropriate position that the council will take," said Claude Heller, the current Security Council president, and Mexico's U.N. ambassador. When the council would reconvene wasn't clear, but Heller said it would be "as soon as possible."

"I think that there is a very strong call for dialogue, to reconvene, and I think there is consensus in saying that the Security Council regretted the government of [North Korea] disregarded the call by [the] international community to suspend the launching," he said.

The launch, at about 11:30 a.m. Korean time on Sunday, set off an immediate firestorm of criticism, inflamed tensions in the Far East, and heightened fears over the North Korean regime's potential ability to undermine nuclear non-proliferation efforts.

The North Korean government said the act was a peaceful launch of a satellite, but a U.S. State Department spokesman declared it a "provocative act in violation" of a 2006 Security Council resolution prohibiting North Korea from conducting ballistic missile launches.

"The launch constituted a clear-cut violation" of the resolution, said Susan Rice, the U.S. ambassador to the United Nations. North Korea's action "merits a clear, strong response" and in the U.S. view, that would come in the form of a council resolution, Rice said.

Japan's U.N. representative, Yukio Takasu, who requested the emergency meeting, agreed, saying the council's response should be clear and unified.

Watch Japanese reaction to reports of at launch »

The Security Council's response could come in several forms, including a resolution, a Security Council presidential statement or some other form of public condemnation.

Still, the U.N. ambassador from China -- a council member and ally of North Korea expected to resist a resolution -- said the formal reaction to the reclusive nation should be "cautious and proportionate."

"We are now in a very sensitive moment," Ambassador Zhang Yesui said. "All countries concerned should show restraint and refrain from taking action that could lead to increased tension."

U.S. President Barack Obama condemned the launch during a visit to the Czech Republic.

"Rules must be binding. Violations must be punished. Words must mean something. The world must stand together to prevent the spread of these weapons. Now's the time for a strong international response," the president said during a speech before a huge crowd in Prague.

"North Korea must know that the path to security and respect will never come through threats and illegal weapons. All nations must come together to build a stronger global regime. That's why we must stand shoulder to shoulder to pressure the North Koreans to change course," he said.

Obama is in the middle of a five-nation, eight-day European tour. He was awakened in Prague with news of the launch early Sunday.

"First, he wants to solidify his own position as the leader of his country, following a stroke," Sherman said on CNN's "State of the Union."

"He [also] wants to tell his military that it's a military-first economy, because, in fact, they get money -- funds from the sale of this missile technology.

"And he wants to say to the Obama administration, 'Pay attention to me. I'm serious. I have chips on the table, and negotiating with me is serious business.' "

The North Korean government claimed the launch put a satellite into orbit. American military officials, however, said the launch was a failure, saying the rocket's payload cleared Japanese airspace but didn't enter into orbit.

"Stage one of the missile fell into the Sea of Japan. The remaining stages along with the payload itself landed in the Pacific Ocean," according to a statement from the North American Aerospace Defense Command and the Northern Command, read by White House Press Secretary Robert Gibbs.

"No object entered orbit and no debris fell on Japan," and NORAD and the Northern Command assessed "the launch vehicle as not a threat to North America or Hawaii and took no action in response to this launch," said Gibbs.

Takeo Kawamura, Japan's chief cabinet secretary, told reporters that his country's military was not forced to intercept any missile, which it had pledged to do if necessary. Japanese ships were moving to the areas where parts of the rocket are believed to have fallen to retrieve them, Japanese government officials said.

"We cannot withhold our regrets and disappointment that North Korea has caused such a serious threat to peace ... when the entire world is joining efforts to overcome the global economic crisis," Lee Dong-kwan, a presidential spokesman said.

The following is a sampling of reaction to the launch from other world leaders before the Security Council meeting:

"Given the volatility in the region, as well as a stalemate in interaction among the concerned parties, such a launch is not conducive to efforts to promote dialogue, regional peace and stability. The Secretary-General urges DPRK to comply with relevant Security Council resolutions, and all countries concerned to focus on ways to build confidence and restore dialogue, including the early resumption of the six-party talks."

• Russia's foreign minister called for restraint after the launch, the Russian Interfax news agency reported Sunday, saying that Russian officials would examine whether it violated any U.N. Security Council resolutions.

• British Foreign Secretary David Miliband: "I strongly condemn North Korea's action in conducting a satellite launch earlier today. Pyongyang [North Korea] continues to pursue a hostile policy towards the rest of the world, it cannot hope to take its rightful place within the international community."

• The European Union presidency, currently held by the Czech Republic: "The EU strongly condemns the 'experimental communications satellite' launch performed on 5 April 2009 by the government of the Democratic People's Republic of Korea in breach of the UNSC Resolution 1718.

"These actions place additional strains on regional stability at a time when the unresolved nuclear issue on the Korean Peninsula requires mutual confidence building. Such actions are also a matter of more general concern due to their global proliferation implications."

"The EU urges the DPRK to comply with the UNSC Resolution 1718 and immediately to suspend all activities related to its ballistic missile programme, and abandon all nuclear weapons and existing nuclear programmes in a complete, verifiable and irreversible manner."