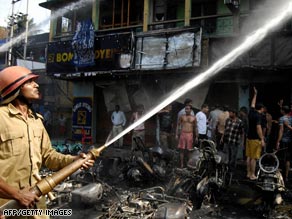 Firefighters attempt to control a fire after an explosion in the Indian city of Guwahati.

Seven people died and 80 were injured in Assam's main city of Guwahati when a bomb went off in a busy marketplace, sub-inspector H. Ali at the state police control room, told CNN.

One person was killed in a separate blast in another district of the state, he said. Of the five explosions hitting different parts of Assam, two were grenade attacks, he added.

Most of the casualties were from a fire that started when motorcycles parked in the same compound were set ablaze by the explosion at 2:30 p.m. local time, he said.

Another blast, a low-intensity explosion, occurred near a mobile phone store in another district of the state, leaving four injured, according to police.

Indian Prime Minister Manmohan Singh was due to visit Assam Tuesday. His spokeswoman, Deepak Sandhu, said there was no change in his program so far.

In a statement, he condemned the Assam bombings and said "adequate measures" would be taken to ensure peace and stability in Assam.

Assam, one of the states in India's troubled northeast, has been hit by several explosions recently.

All About India • Manmohan Singh