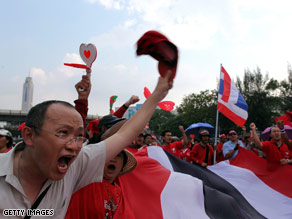 Thousands of anti-government protesters block a busy intersection during rush hour in Bangkok.

Participating Asian leaders were on their way out of the country, according to Thai Prime Minister Abhisit Vejjajiva.

He declared a state of emergency in Chonburi province and the southern coastal city of Pattaya, where the summit was to be held, but rescinded the order hours afterward.

Thousands of "red shirt" protesters, named for the color of their attire, have rallied for days to demand Abhisit's resignation.

The demonstrators flooded into the summit site after smashing through the hotel's glass doors, but were otherwise nonviolent. Hundreds of them streamed in, without police interference. Protesters hugged the officers and shook their hands.

The red shirts have given the prime minister repeated deadlines to resign, but those have come and gone.

United Nations Secretary-General Ban Ki-moon he was disappointed by the summit's delay.

"I understand the circumstances that led the Thai government to take this difficult decision. While I had hoped to have exchanges with the leaders of ASEAN and its dialogue partners, I continue to look forward to engaging again with them in the near future," Ban said.

"I strongly value the long-standing relationship between ASEAN and the United Nations, and their cooperation in various fields. I hope for an early restoration of normalcy in Thailand and for the settlement of differences through dialogue and peaceful means," he added.

The protesters are loyal to former Prime Minister Thaksin Shinawatra, who was ousted in a 2006 coup.

Thaksin now lives outside of Thailand. The protesters have said Abhisit's government was not democratically elected and want him to resign and schedule elections.

Abhisit, who has held the position for four months, has rejected calls for him to step down.

Lawmakers named the 44-year-old, Oxford University-educated Abhisit prime minister in December in the wake of months of demonstrations against Thaksin and his ruling party, People Power Party.

On Tuesday, protesters rushed Abhisit's motorcade while it was struck in traffic. He escaped unharmed.

The red shirt protesters said this week they would not take over the airports.

Dan Rivers and Kocha Olarn contributed to this report.