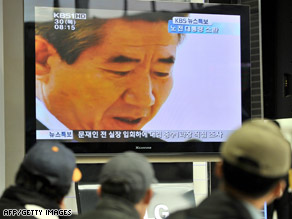 Roh made his remarks at his home in Bongha village in Gimhae, about 280 miles (450 km) southeast of Seoul, before leaving for the capital to meet with prosecutors.

Roh is the nation's third former president to be summoned, following in the footsteps of Chun Doo-hwan and Roh Tae-woo, both of whom were convicted in 1995 of receiving bribes and inciting a mutiny. They were sentenced to death but received pardons in 1997 by then-President Kim Young-Sam.

Roh, who ended his term in office in February 2008, has not been formally charged. Investigators, however, have linked him to an alleged $5-million bribery scandal involving Park Yeon-cha, a businessman and longtime supporter arrested last year on graft and tax evasion charges, Yonhap reported.

Roh denied the allegations in a written statement submitted to the prosecution on Saturday, according to Yonhap.

Roh will also be questioned over a separate corruption scandal involving his former aide Jung Sang-moon who was arrested last week, according to Yonhap.

All About Roh Moo-hyun