ISLAMABAD, Pakistan (CNN) -- About 80 boys and 20 staffers in an orphanage were trapped during intense fighting between the Pakistani military and the Taliban Wednesday, the orphanage director said. 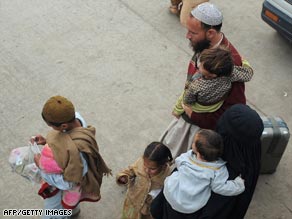 A family arrives in Rawalpindi after fleeing fighting in the Swat Valley.

The children trapped in the four-story building in the town of Mingora in Pakistan's Swat Valley felt as if they were under siege because the fighting was so close, said Muhammad Ali, director of the orphanage.

Staff members said they only had enough food to last two more days.

The children in the orphanage range between the ages of 5 and 17. They were in the basement Wednesday while Pakistani troops stood guard on the roof, Ali said.

Fighting had intensified in the area as an eyewitness saw 15 dead civilians being taken from a village in Mingora Wednesday. Twelve of the dead were children.

Ali said he is asking the military and the Taliban to not the attack the orphanage, which is about 60 meters (65 yards) away from the military headquarters in Mingora.

The orphanage usually houses about 250 male orphans who also receive schooling there. But about 170 orphans were taken to different locations.

There are also 450 other students who attend school there during the day, but do not live there.

This fighting comes a day after local government officials issued an evacuation order for the Swat area.

Some 500,000 civilians are expected to flee the area ahead of an expected military offensive in the Taliban-dominated region.

A senior administration official told reporters that the U.S. objective of the meetings is "an alliance with these countries against a shared threat."