ISLAMABAD, Pakistan (CNN) -- Pakistani forces have killed as many as 200 Taliban militants in the past day in the Swat and Shangla areas, the military said Sunday. 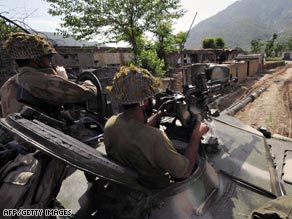 CNN could not verify the account, because journalists are barred from the region.

The military blamed the Taliban for injuring civilians as the offensive entered its third week.

"Indiscriminate mortar firing and planting of IEDs [improvised explosive devices] in the streets and roads by the miscreants in the populated areas of village Thana, Malakand and Mingora, resulted into civilian casualties," the military said in a statement.

The military eased a curfew on the region, allowing civilians to flee the fighting between 6 a.m. and 3 p.m. (7 p.m. Saturday and 4 a.m. Sunday EDT).

The United Nations refugee agency warned Friday of a "massive displacement" of civilians as the military wages its campaign with helicopter gunships, tanks and artillery.

In the last few days, an estimated 150,000 to 200,000 Pakistanis have fled the military operation, according to U.N. High Commissioner for Refugees spokesman Ron Redmond, citing provincial government data. Another 300,000 Pakistanis were on the move or expected to flee the fighting.

At least two soldiers were killed Sunday, and another died of wounds he suffered on Friday, the military statement said.

The military has been releasing regular reports saying it has killed Taliban militants in the region, but it has produced little evidence of the successes it claims. Journalists have not been permitted to observe the offensive and the army has not shown the bodies of the dead militants.

It is also not clear what effect the offensive is having on the overall fight against the Taliban in the region, as fears grow that they could threaten the stability of Pakistan, a nuclear-armed power and key U.S. ally.