Plight of the giant panda: Animals struggle after quake

BEIJING, China (CNN) -- As people across China's Sichuan province continue to rebuild their lives one year after a 7.9-magnitude earthquake leveled some towns and cities, the region's famed giant pandas are still struggling due to the devastation wreaked by the deadly temblor. 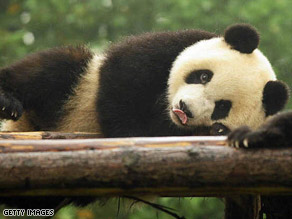 A panda cub at the Giant Panda Breeding Centre in Chengdu last week.

The quake triggered mountain landslides and caused damage across large areas of the forests at the Wolong Giant Panda Protection Studies Center, also known as "the Home of Pandas." A majority of the reserve's panda living facilities and its studies facilities were damaged.

"The pandas were traumatized by the quake. Many of them ran up to tree tops and wouldn't come down. These are all signs of stress," said Wang Pengyan, Wolong's chief engineer.

"Our staff have taken many measures. We spent a lot of time to communicate and play with them. In this way, they recovered slowly. We talked to them in kind voices, usually praising them how good and nice they are," Wang said. "The quake could be one of the reasons why there were less newborn pandas this year. This is only our assumption so far."

Most of the animals survived the quake at the reserve, located just eight kilometers from the quake epicenter, though one - a female named Mao Mao - was found dead, two were injured and one is still missing today.

"Our panda homes have been damaged by the earthquake, so we had to keep our pandas in limited space. This creates a lot of pressure both on our staff and on the pandas," said Wang Pengyan, Wolong's director. "Limited living-space for the pandas has been the biggest challenge for the reserve so far."

The lush, mountainous region is the natural habitat of the giant pandas. Before the earthquake, China boasted of 128 pandas born in captivity, of which 63 were born in the Wolong reserve.

In recent months, Wolong's giant pandas have been transferred to the Ya'an reserve -- which is 110 kilometers from the quake epicenter and has become known as the "quake survivor shelter" for pandas -- and to other cities in China for temporary shelter. In April, the last six pandas born in captivity in Wolong were moved into their new homes in Ya'an.

A new location has been selected for the Wolong Reserve in Wolong's Dida Village, about 10 kilometers away from the original location. The reconstruction, supported by the Hong Kong SAR government, will start in August this year. Their new homes are expected to be ready in two years time.

There are around 1,590 wild pandas in China, according to the Wolong center.

"We haven't found any giant panda in the wild who died from the earthquake," Wang said.

"The wild pandas' survival hasn't been directly threatened by the earthquake. However, they are also suffering from the damages to their natural environment."

For years, these beloved creatures have become symbols of nature preservation.

For China, they have often played special roles as the Asian giant's cuddly diplomats -- in zoos at home and overseas and during international events such as the Beijing Summer Olympics.

In 2008, eight pandas from various nature reserves were flown to the Beijing Zoo for a six months' special appearance before and during the Olympics.

In April of this year, six other pandas -- five of them quake survivors -- were sent from a panda base in Chengdu to the Beijing Zoo, waiting for the Chinese 60th National Day celebration in October.